If you’re new to needlework, you may come across a lot of terms you don’t understand at first. Today, on this Beginner’s Guide to Five Types of Embroidery we’ll cover 5 main categories you’re likely to encounter in your exploration of needlework: blackwork, whitework, stumpwork, cross stitch and crewel embroidery. You’ll learn what these terms mean, the history of each, and how you can learn and master the embroidery techniques which fall under each category.

For additional reference, we’ve created a comprehensive glossary of embroidery terms available for free here on the EGA website.

Traditionally, blackwork embroidery used black threads on white fabric in both surface stitchery and counted work. Since the 1920s, it has been regarded as a counted thread embroidery traditionally worked in dark thread on a light background. This technique uses repeat geometric patterns as fillings for design units. Reversible blackwork is a special technique in which the embroidery is worked in the double running stitch so that the same, or an equally delightful, stitch pattern is produced on the underside. This type of blackwork is often referred to as Holbein embroidery.

The History of Blackwork

Black and white embroidery is mentioned in Chaucer’s Canterbury Tales, written between 1388 and 1400, and for centuries it has been found in peasant embroideries of eastern European countries. Of great antiquity, blackwork is believed to have originated in the Eastern Mediterranean and traveled with the Moors to Spain. Catherine of Aragon, the Spanish wife of Henry VIII, popularized it in England during the 16th century. In household inventories of their time Spanish work is mentioned, but it is not certain that this type of embroidery is the same as the blackwork now produced. During this period, Hans Holbein the Younger painted the English nobility in their elaborate garments, many of which were embellished with blackwork embroidery. Abandoned in the 17th century, blackwork has seen a revival in the early 20th century. Today in order to express contemporary ideas, it has become freer in style and color as it is used in both pictorial form and to embellish clothing. Principal stitches used in blackwork are the double running stitch, which is also called Holbein stitch, backstitch and darning stitch. Outlines, when used, are done in double running, stem, chain, couched, or other appropriate outlining stitches. Any even-weave white or light-colored fabric with any dark-colored working thread that is roughly equal in diameter to a thread of the ground fabric is suitable for blackwork. Modern pieces frequently are worked in dark fabrics with light threads. Metallic threads and paillettes can be used for accents.

The term whitework describes all embroidery which is colorless and worked with white, unbleached cotton, or linen thread. Whitework falls into many categories but may be classed as coarse work and fine work. Coarse whitework includes embroidery techniques such as cutwork, Mountmellick, Hardanger, old hedebo, and reticello. Some examples of fine whitework include Ayreshire, Carrickmacross, chikan work, Dresden work, and shadow work appliqué. 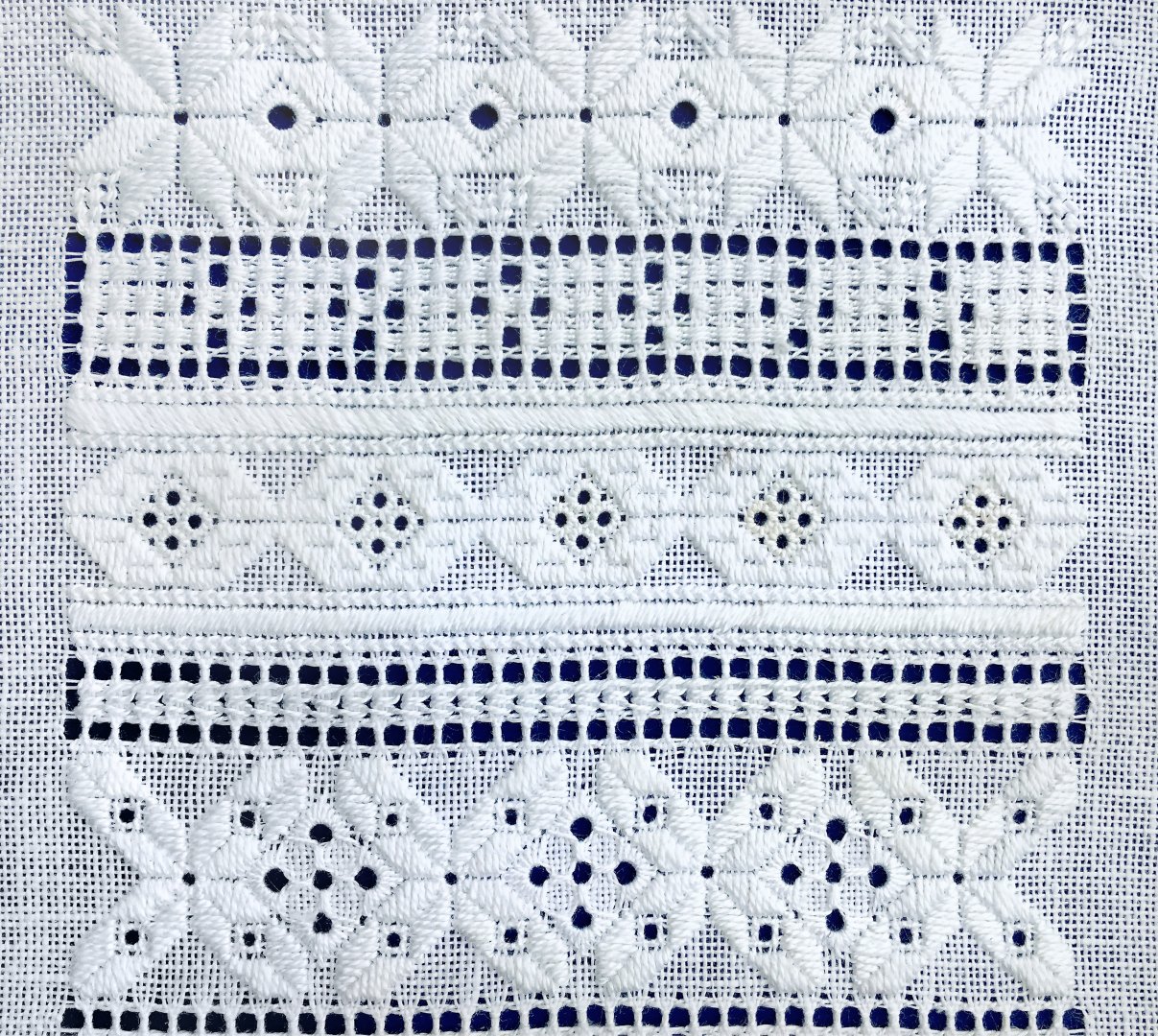 The History of Whitework

Early examples of whitework date from around the 15th century, although records indicate it was produced earlier. Whitework was common in China, India and throughout most of Europe, where many of these techniques were used to embellish household linens or create religious items such as altar cloths and church vestments.

There are a number of excellent tutorials, free projects, classes and workshops covering various whitework techniques online. Here are a few to bookmark: 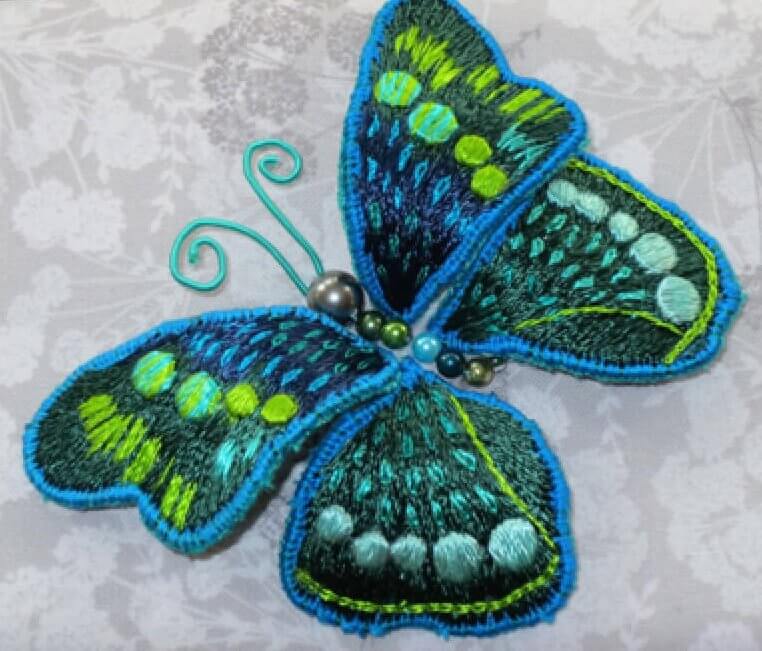 The History of Stumpwork

There are a number of excellent tutorials, free projects, classes and workshops covering various stumpwork techniques online. Here are a few to bookmark:

What is Cross Stitch Embroidery?

As you might guess from the name, this technique uses two stitches that cross one another worked in a diagonal pattern. The cross stitch is a basic stitch used in many styles of embroidery and has been worked by embroiderers throughout the world. It has been found in embroideries from ancient China and the Near East. Its simple beauty consists of the points forming a perfect square. Cross stitch embroidery can be divided into two techniques: one is worked on fabric which has the stitches printed on it, and the other is counted on evenweave fabric. Counted cross stitch designs are worked from a chart or graph, with each square on the paper equal to a cross stitch.

The History of Cross Stitch

Examples of cross stitch have been found throughout the world dating as far back as the middle ages. Traditionally, cross stitch has been used to embellish household linens, but the popularity of samplers kept this technique alive, and today it is primarily used to create decorative (rather than utilitarian) items.

What is Crewel Embroidery?

Crewel is surface stitchery worked with a loosely twisted 2-ply wool yarn on a firmly woven fabric, The stitches are freely worked, rather than counted.

The stitches of crewel embroidery can be classified into 5 categories: 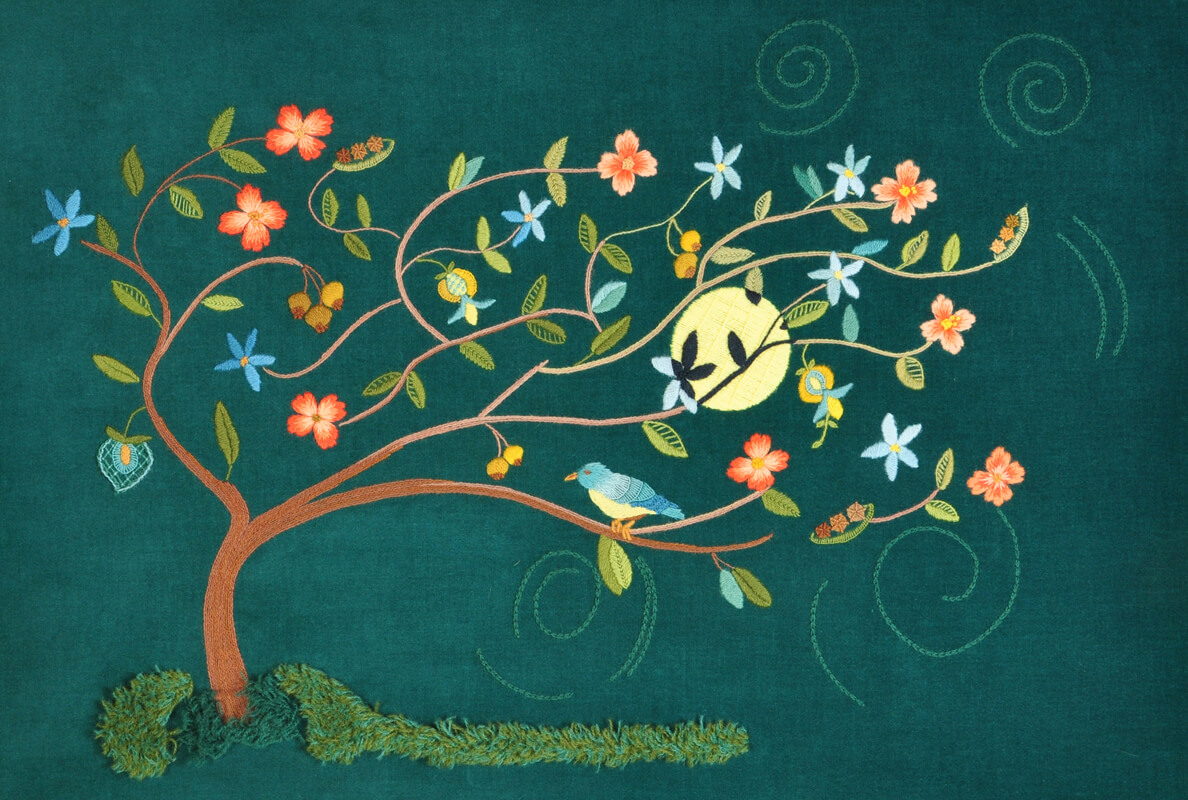 The History of Crewel Embroidery

The term crewel formerly referred to the wool yarn and probably came from the Anglo-Saxon work “cleowen” or ball of thread. The earliest surviving crewel embroidery is the Bayeaux Tapestry, dated 1067-70. During the Elizabethan era (1558-1603) the British East India Company opened trade routes to the Far East, and new embroidery designs flowed from east to west. There is much symbolism in the designs of this period and the colors were generally monochromatic, frequently in blues and greens with an occasional red. With the advent of the Jacobean era (James I, 1603-1625) the fanciful “Tree of Life” designs were frequently seen and the colors were brighter. The Queen Anne period (1702-1714) saw the use of silks replace wools, with the designs much lighter in appearance.

In Colonial America, fewer stitches were used in crewel embroidery. The New England laid stitch became popular because of its economical use of wool yarn. Today most designs are embroidered in 2-ply wool yarn with possible highlights in other threads and the majority of the designs show Jacobean influence.

We hope this post helps you get started in your new needlework hobby. For more information, we have many more resources available here on our website. Non-members can access our PDF glossary of terms and projects for free; we also share information about scholarships and award opportunities, our monthly Stitch-Along, the EGA Library and more. 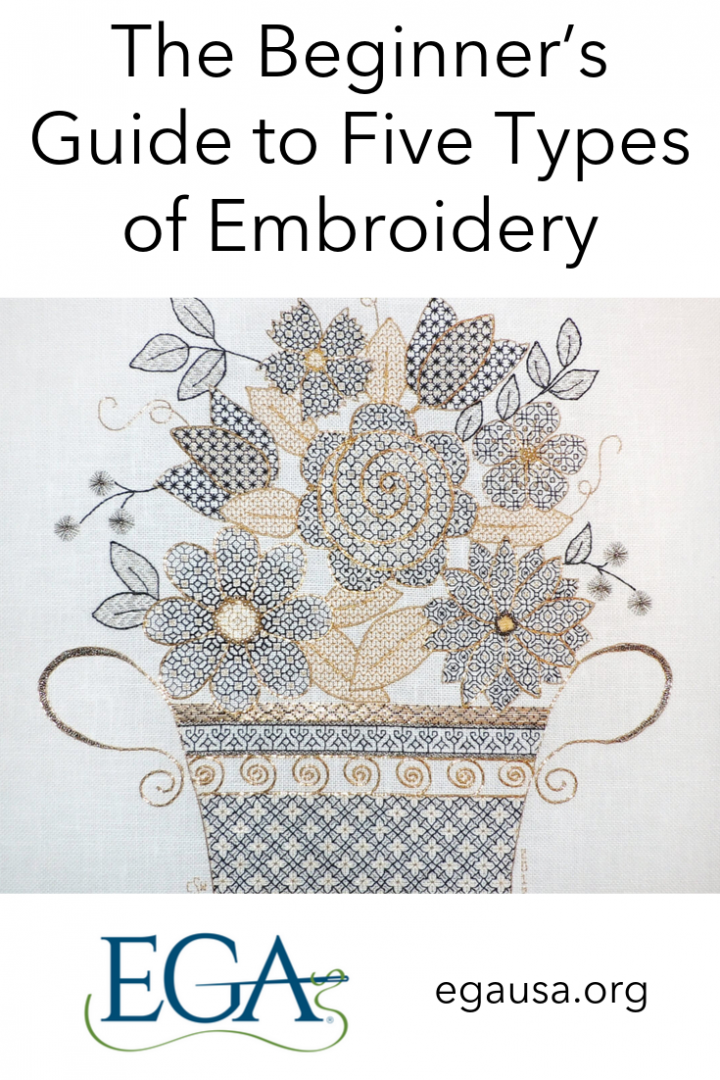