America the Beautiful
The song, the land, and the stitch!

The National Tapestry: America the Beautiful began its long journey to completion in 2003. Designed and painted by EGA member Judy Jeroy, over the next five years thousands of members of the EGA worked to fill every inch of the five panels with needlework illustrating the incredible diversity of life in America. The tapestry, an impressionistic piece, uses nature’s flora and fauna against the country’s landscape. The tapestry is on display at our Headquarters in Louisville, Kentucky.

Numerous techniques and stitches were employed to bring the mono-canvas panels to life. Some slips were created by individual artists and worked into the piece after they were completed. Historically slips were worked in wool and silk on linen canvas in tent or cross stitch. They were often simple in design and out of scale, but were still identifiable and accurate in their rendering. While staying true to tradition in some ways, this piece has crossed established boundaries and traditional concepts of textile tapestry history.

Each panel contains wording from the song America the Beautiful, and the typography was created by EGA member Canby Robertson. Coats & Clark donated the thread, Kreinik the metallics, and Zweigart the canvas.

“One of the wonderful developments of this tapestry is the diversity and differences in each panel. Oceans on each side of the U.S. are unique and representative of the variety of plants and animals found in each area. An eagle on each panel became an unexpected object of continuity. When the panels were placed together, it was apparent that the eagle took flight on the West Coast panel soaring across the sky, coming to the Eastern Seaboard’s panel wording (and so appropriate) “from sea to shining sea.” The movement of the eagle across the panels is just one of many surprising developments of the project.” — Kay Haley, Needle Arts June 2007

Below you will find information about each of the panels, including photos and links to the articles published on Needle Arts magazine when the tapestry was being created. Come visit us at EGA Headquarters for an even closer look at the impressive needlework showcased on the tapestry!

Panel one is the East Coast of the U.S, from Rochester, New York, down through St. Petersburg, Florida.

Panel three represents the central part of the the U.S., stretching from the northern Canadian border to the Gulf of Mexico.

Panel four covers mostly the Rocky Mountain region. The west­ern border runs from Montana to Arizona. The mountains of the top contrast with the desert areas at the bot­tom of the panel.

Panel five includes Alaska, Arizona, California, Hawaii, Nevada, Oregon, and Washington. A wide variety of animals, including sheep, are found in this panel. 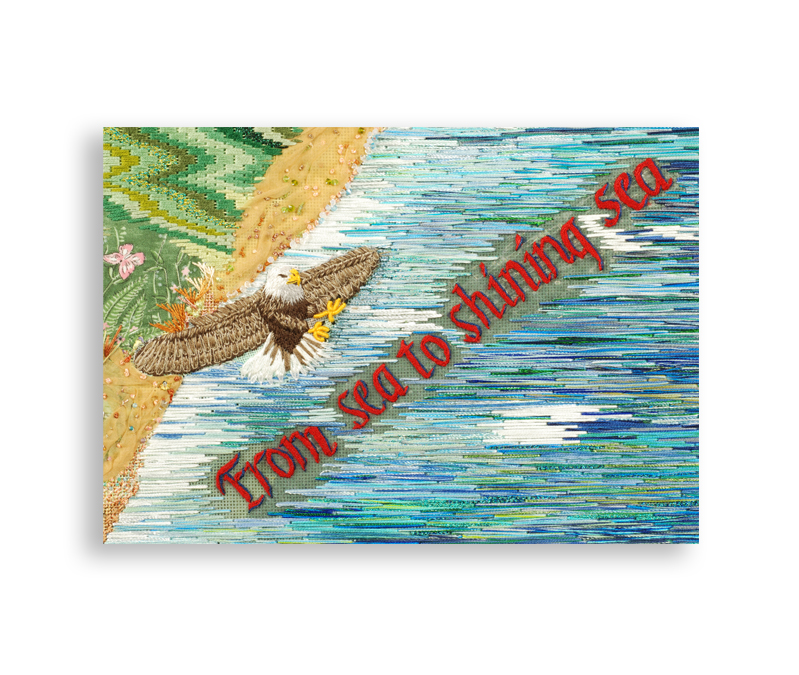 Do you love needlework? Support our mission to inspire passion for the needle arts through education and the celebration of its heritage with a donation or by becoming an EGA member today!

Join EGA Give a Donation