#EGAStitcher @quiet_hours shared these beautiful commissioned antique French-style monogram embroideries and now we want our very own E G A. Don't forget to tag your work with #EGAStitchers!
EGA members can celebrate the change in seasons with the Landscape Series by Karen Wojahn. The Autumn Landscape piece showcases the beauty of autumn's foliage. This is a really fun set of projects to work on over the course of the year, marking the seasons with small embroidered landscapes. Access to the 70+ designs in the Petite Projects library is just one of the many benefits of EGA membership! https://egausa.org/petite-projects/
Registration for our online class B Sampler ends soon! In this class you will stitch a sampler of stitches containing the letter B in the title.
Mexican artist Victoria Villasana (@villanaart) strives to "weave stories that connect us." Her work transforms staid black and white photography into fluid, vibrant, colorful embroideries that celebrate life and people. Learn more about her here: https://observer.com/2022/08/mexican-textile-artist-victoria-villasana-believes-creation-is-vital-to-self-growth/ #NationalHispanicLatinoHeritageMonth
Today is the last day for EGA members to access early registration for National Seminar 2023: Boston Stitch Party. Register now to guarantee a spot in one of our fantastic classes, like the out-of-this-world Intergalactic Fruit Salad mini-course presented by the New England region and taught by Amee Sweet-McNamara. Learn more and register on the #linkinbio.
Yesterday was #ElephantAppreciationDay so we're doing a #fbf and flashing back to our Maharajah's Elephant GCC with Mary Long. If you're interested in making an elephant of your own, gather some pachyderm-loving #EGAStitchers and sign up together for this fabulous group correspondence course! You'll learn the technique of canvas applique and work stitches like alternating Scotch, mosaic, Rhodes, satin, rice and eyelet. #linkinbio

Our Starlight Stitchers Chapter in Arizona recently hosted our 21st National Exhibit Through the Needle’s Eye in Arizona. Read a full report of their experience below.

We are a small but mighty chapter in Arizona. A couple of years ago, one of our members saw a notice on the EGA website about the 21st National Exhibit and an invitation to host. Hmmm. Why not Arizona? Why not us? The chapter agreed to explore the possibility. After all, it would be a suitable way to celebrate our 30th anniversary as a chapter. The challenges we faced were finding a venue to host the exhibit and staffing it. 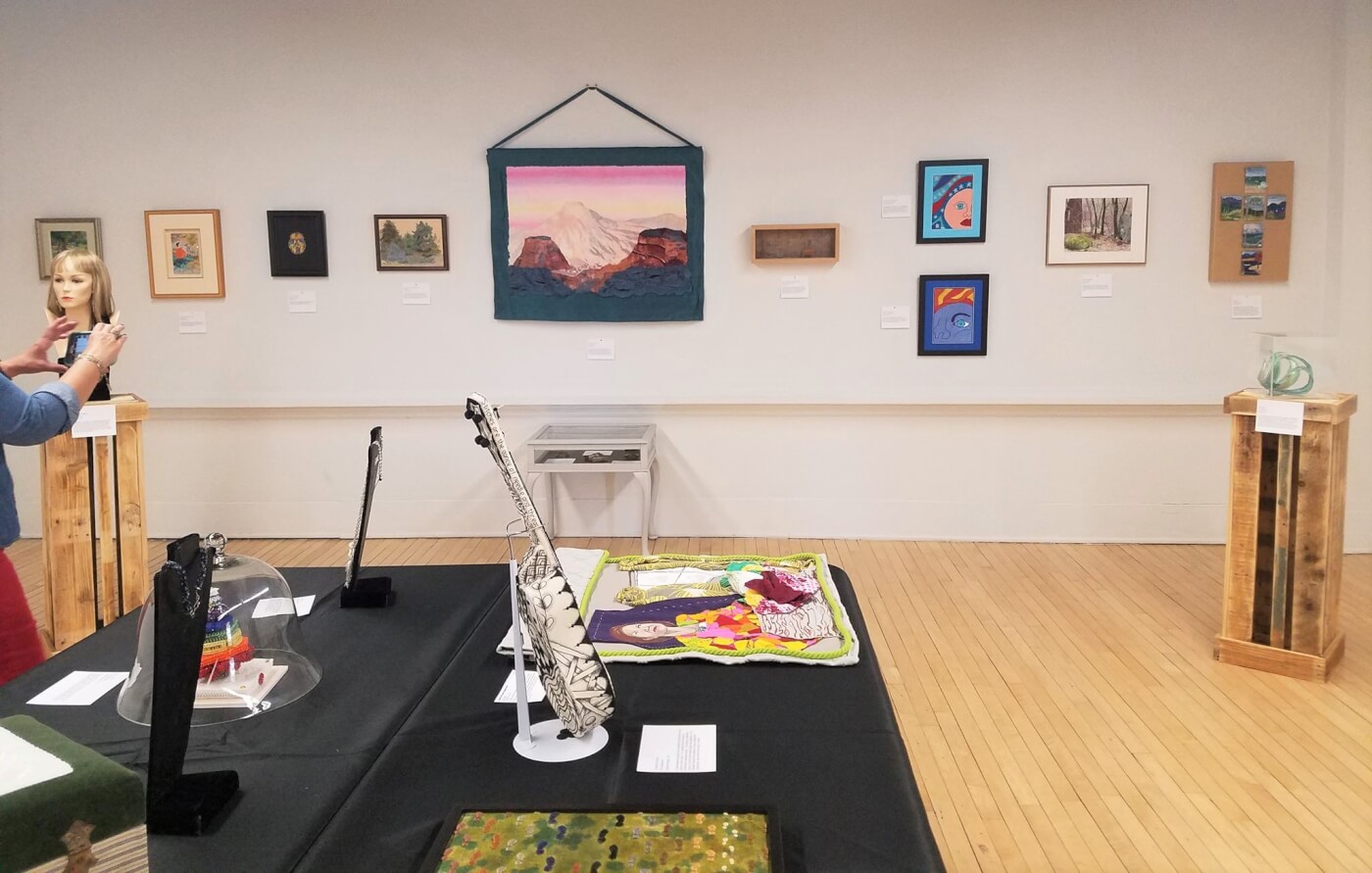 Karma, Fate, Serendipity stepped in: a friend mentioned the Gilbert Historical Museum. It regularly hosts a quilting exhibit and was looking to become more of an arts center than simply a historical museum. Kayla Kolar, the director of the museum (now called HDSouth), met with Starlight Stitchers and agreed to host the exhibit at the same time that the quilt exhibit would be there: April and May, 2018. Our job: find docents to keep an eye on the exhibit, since it would be in a separate gallery. A call went out to other chapters in Arizona, to friends, and to family. And they all stepped up. All the docent slots were filled.

On a Saturday morning, March 31, in a span of five hours, Jean Doig and her mom Bette, Mary Louise Eck, Kim Garza and her husband Ric, Helene Ossipov and her husband Rick, and Gloria Zanella put up the exhibit. Near disaster: one of the frames was damaged in transit. The embroidery was not harmed, but the frame was cracked. A quick call to Brad. Then a quick call to Sandy Bortz, framer extraordinaire at Attic Needlework. She fixed the frame in record time.

Over the six weeks that the exhibit was open, 477 people stopped in to see it. A Girl Scout troop from 30 miles away came to see it and the quilts in the museum, in order to earn their textile proficiency badges. Some workers from the museum stopped by every morning just to look. People who were interested in needlework came by. People who didn’t know you could do that with a needle and thread came by. They asked questions, they oohed and aahed.

Finally, on May 15, Jean, Mary Louise, Kim and Ric, Linda Noecker, and Gloria packed up the exhibit and sent it on its way back to Louisville. This was a wonderful adventure for us. It took a leap of faith, but we did it. Thanks to all who helped: Rosemary Kostansek, who gave wise advice and reassurance; The Desert Threaders Chapter in Phoenix, as well as the Northern Arizona Stitchers and the Tucson chapter, who drove many miles to work with us; family and friends. Some of us (I’m looking at you, Linda) came in early and stayed late, others worked multiple days. We are small but mighty and with mighty good friends.

If you are interested in bringing Through the Needle’s Eye to your area, please contact Brad Cape at EGA Headquarters.