Written by
EGA
Posted in
News 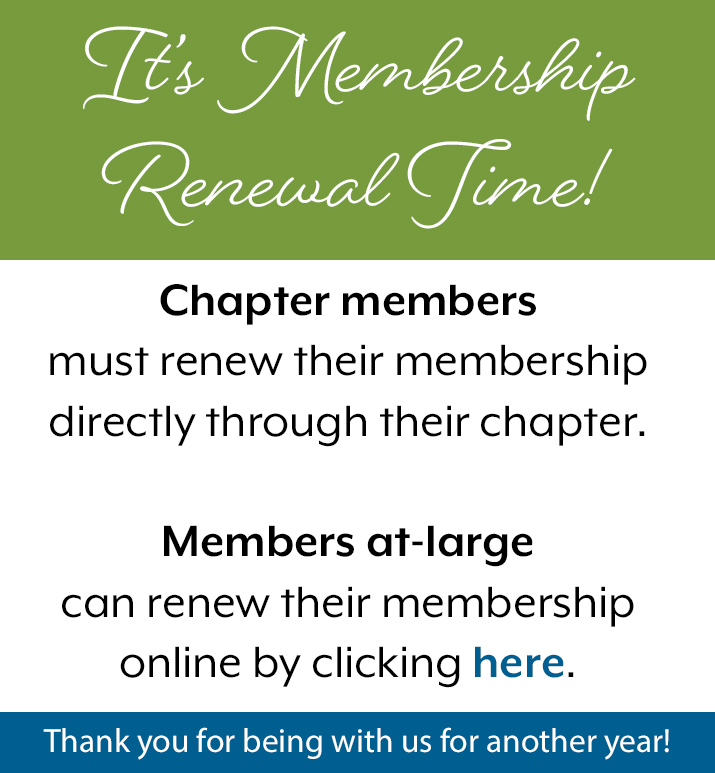 May is also Jewish American Heritage Month. In researching Jewish American artists in the textile community, we came across the celebratory work of Rachel Braun, who considers her embroidery as part of her core Jewish practice and "an entry point into sacred texts." This Blackwork design is captioned "Gates of Jerusalem, cotton thread on Aida cloth, Psalm 122". See more of Rachel's work at @rachel.e.braun and https://www.rachelbraun.net/
Registration is open for our latest virtual lecture: Ernest Thesiger and the hidden history of #needlework by men with Dr. @josephmcbrinn. Visit the link in our bio to learn more and sign up!
Have you seen our latest round of correspondence courses available through May 31st? These courses are usually available only for groups but as GCC Lightning Rounds, any individual member can register and stitch one of these phenomenal pieces. Visit the link in our bio to learn more.
Join us at the 2022 National Seminar where Debbie Rowley will be teaching her newest design, A Mermaid’s Tail. Diving into the depths of clear tropical waters, a mermaid disappears with just a flash of tail to reveal her story. The Mermaid’s Tale features levels of water painted on canvas, defined with several small stitches with Painter’s Threads. Don’t let this mermaid get away! To learn more about this class, visit the link in our bio!
Come to NYC and join Catherine Theron as she teaches her encore 2-day class, The Cylinder Needlekeep. It is a vibrant teaching piece showcasing various detached filling stitches. The lid lifts to reveal 2 wool needle pages and the cylinder itself is stuffed with walnut shells so it can be used as a weight and/or pincushion. To view Catherine’s video and hear more about this class, go to the link in our bio.
Sending lots of love and strength to @cassyjostitches, a new embroiderer who is working on her first project. You've got this! #EGAStitchers

This summer, our Louisville Chapter participated at the Kentucky State Fair where they have been demonstrating needlework for at least 20 years.

The chapter has a designated day every year and members take two-hour shifts throughout the day working on projects they currently have in progress. At times, when the chapter has had a class by a national teacher, or if they have taken one of our Group Correspondence Courses, several members will be working on the same project. While the projects can be the same, the end result can be very different since stitchers at times use different colorways.

While the members demonstrate needlework at their table, many people stop by and comment, often bringing back memories from when they were taught to stitch by their mother or grandmothers. Several new members have joined the chapter after learning of EGA at the fair.

Every year, the Louisville Chapter does a community project. The chapter’s monthly meetings are held at a firehouse, so the past few years they have stitched a firefighter-themed piece to hang in the meeting room of the firehouse, and have also stitched a firefighter-themed piece for them to auction off for their annual charity drive that benefits children in the Louisville area.

Members of the Louisville Chapter also enter numerous pieces in the Textile department of the fair each year, and win numerous ribbons. The image on top is a close-up of Carrots, designed by Jennifer Riefenberg and stitched by Cynthia Welch. 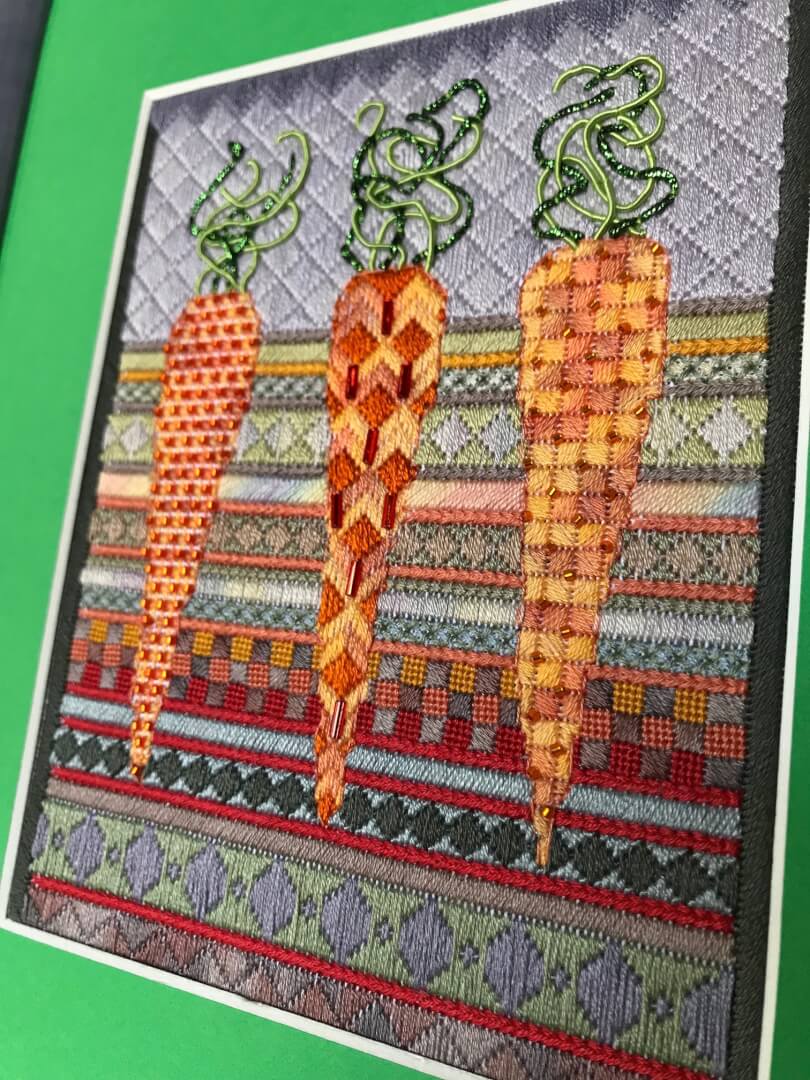 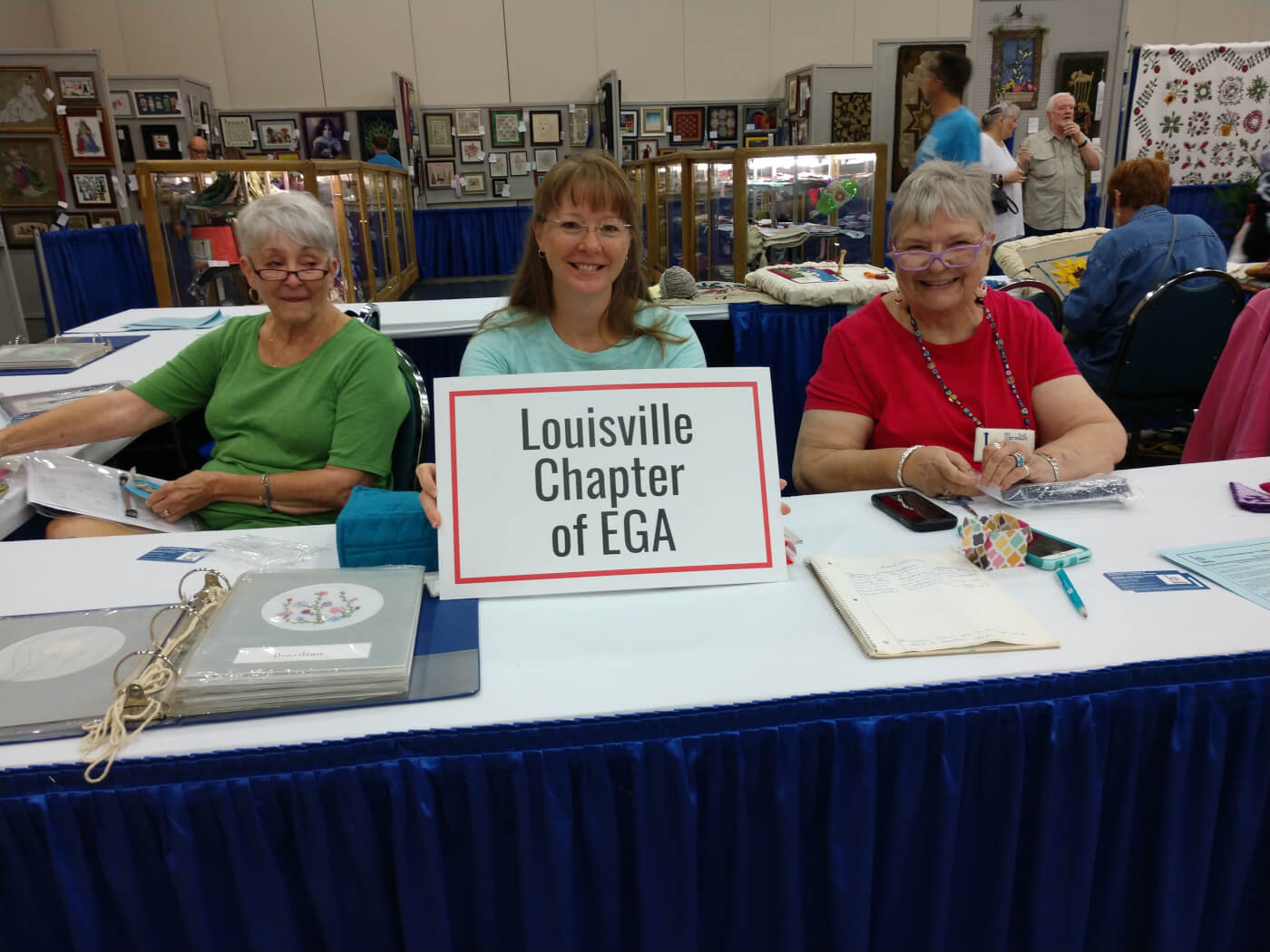 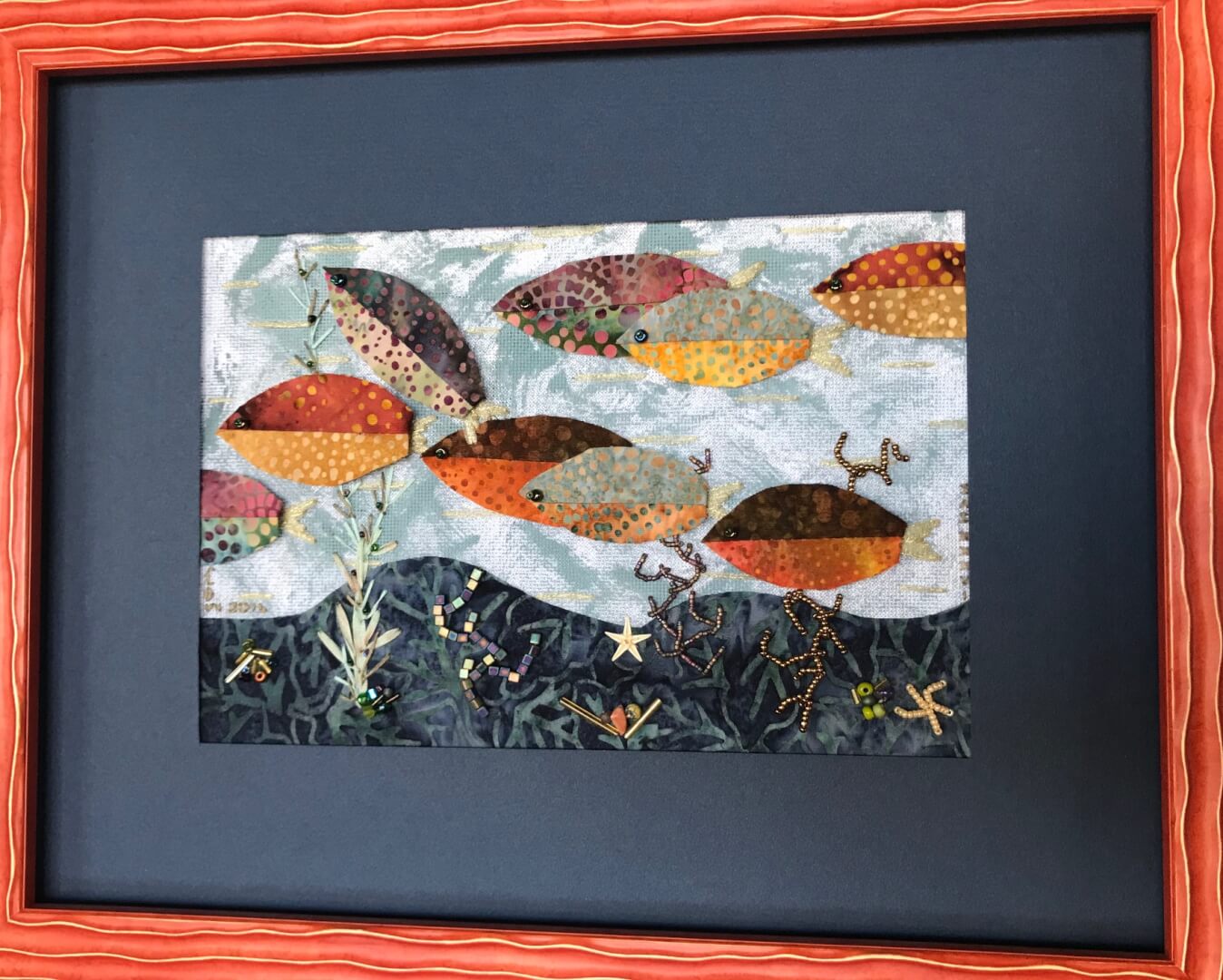 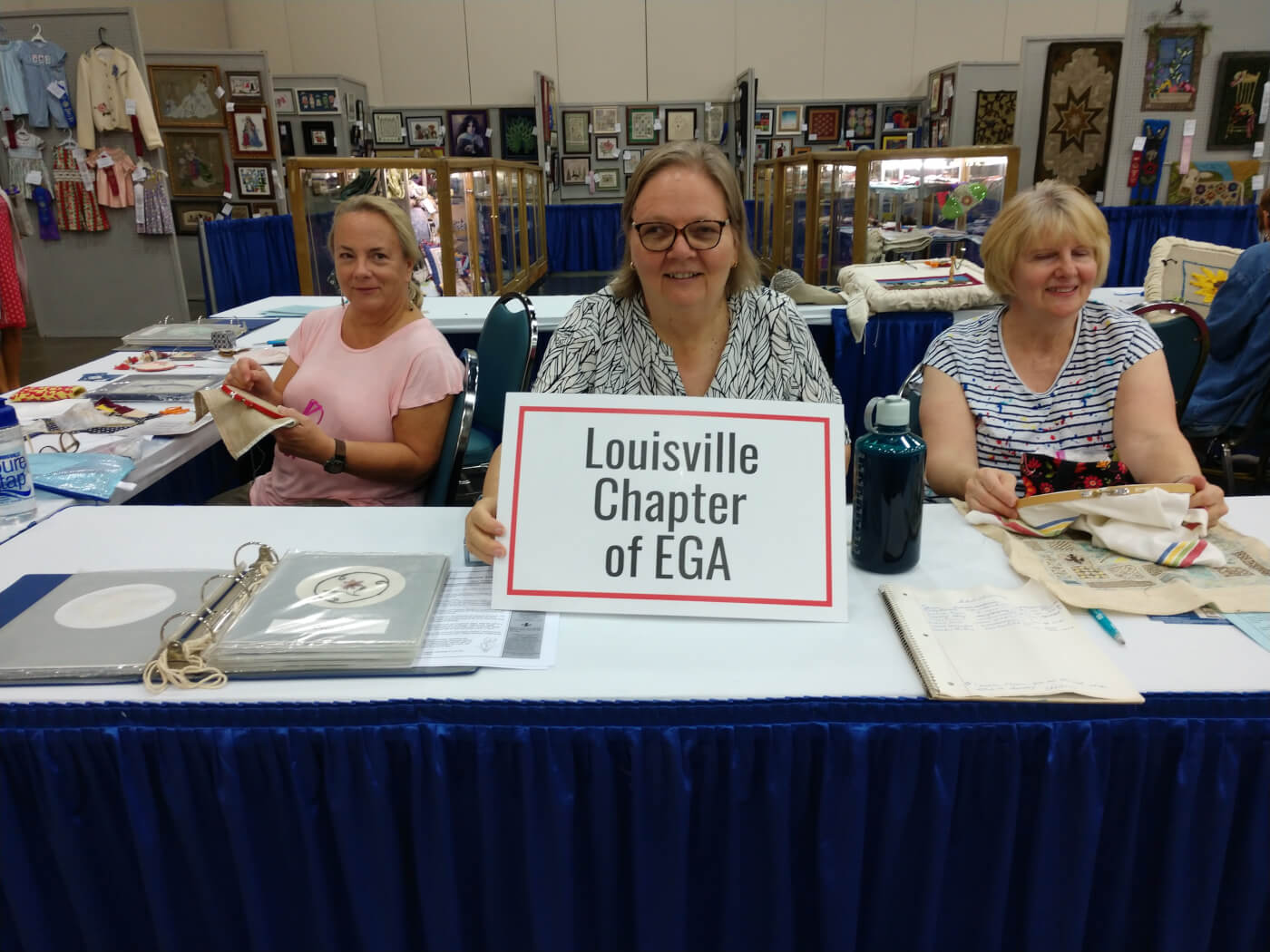 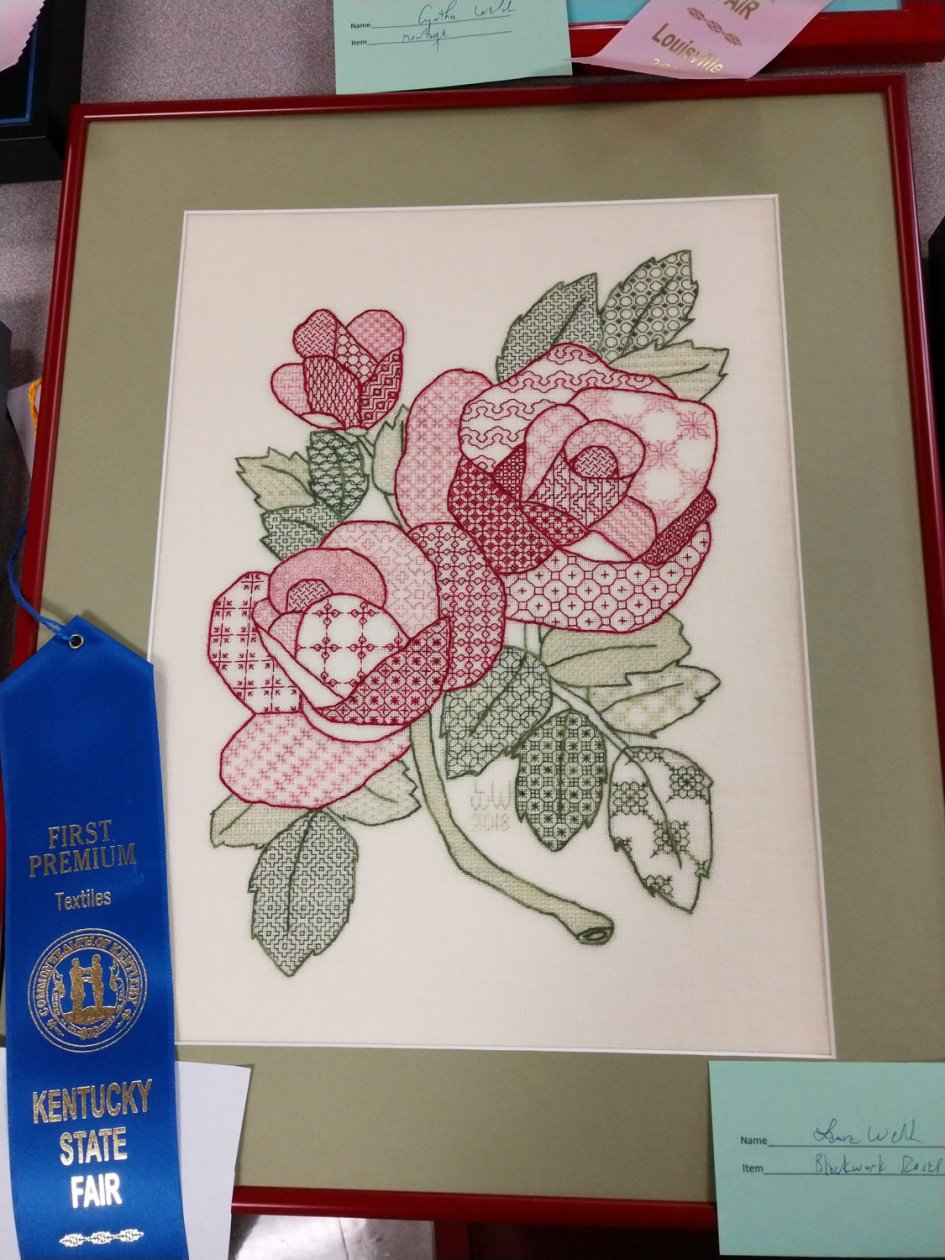 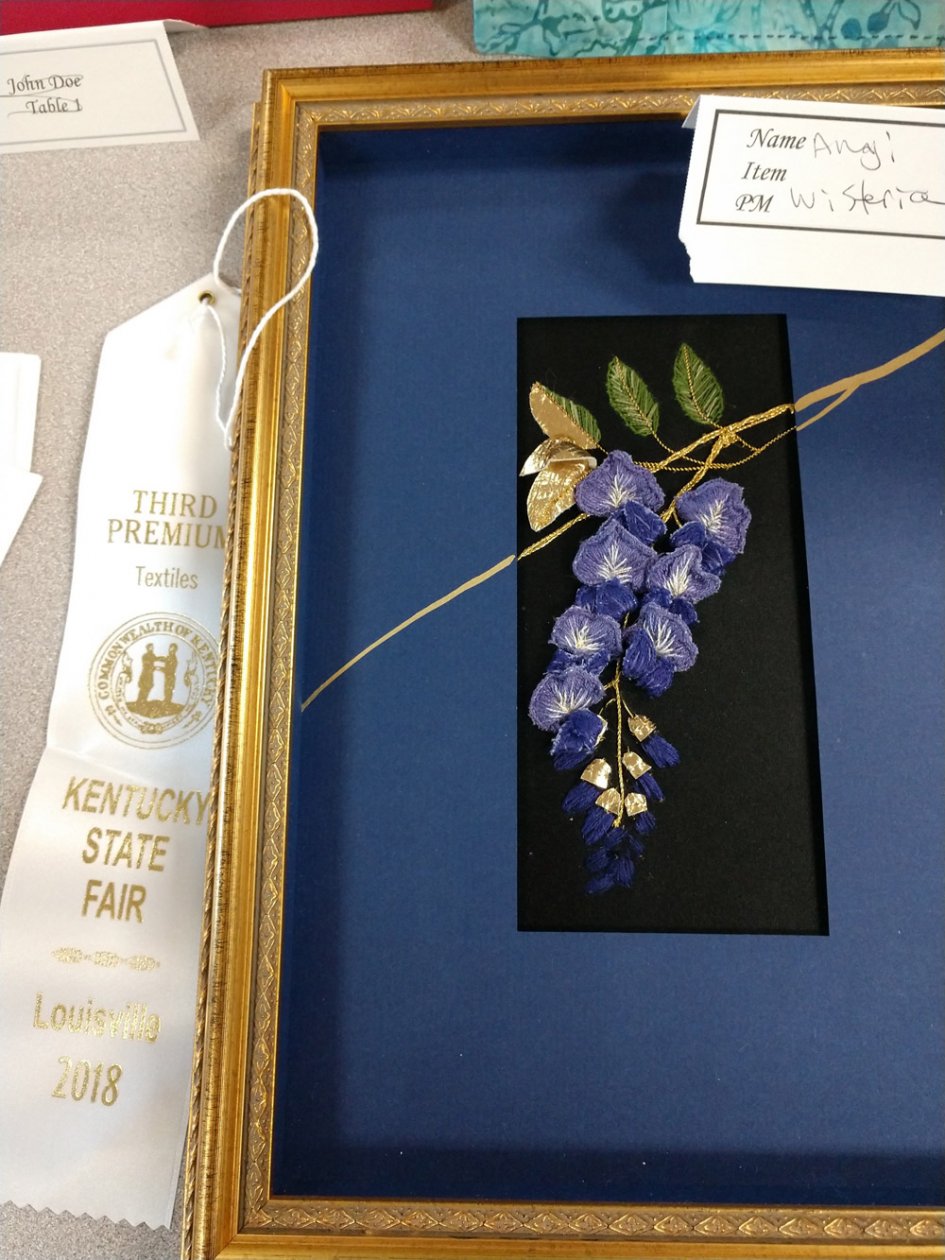 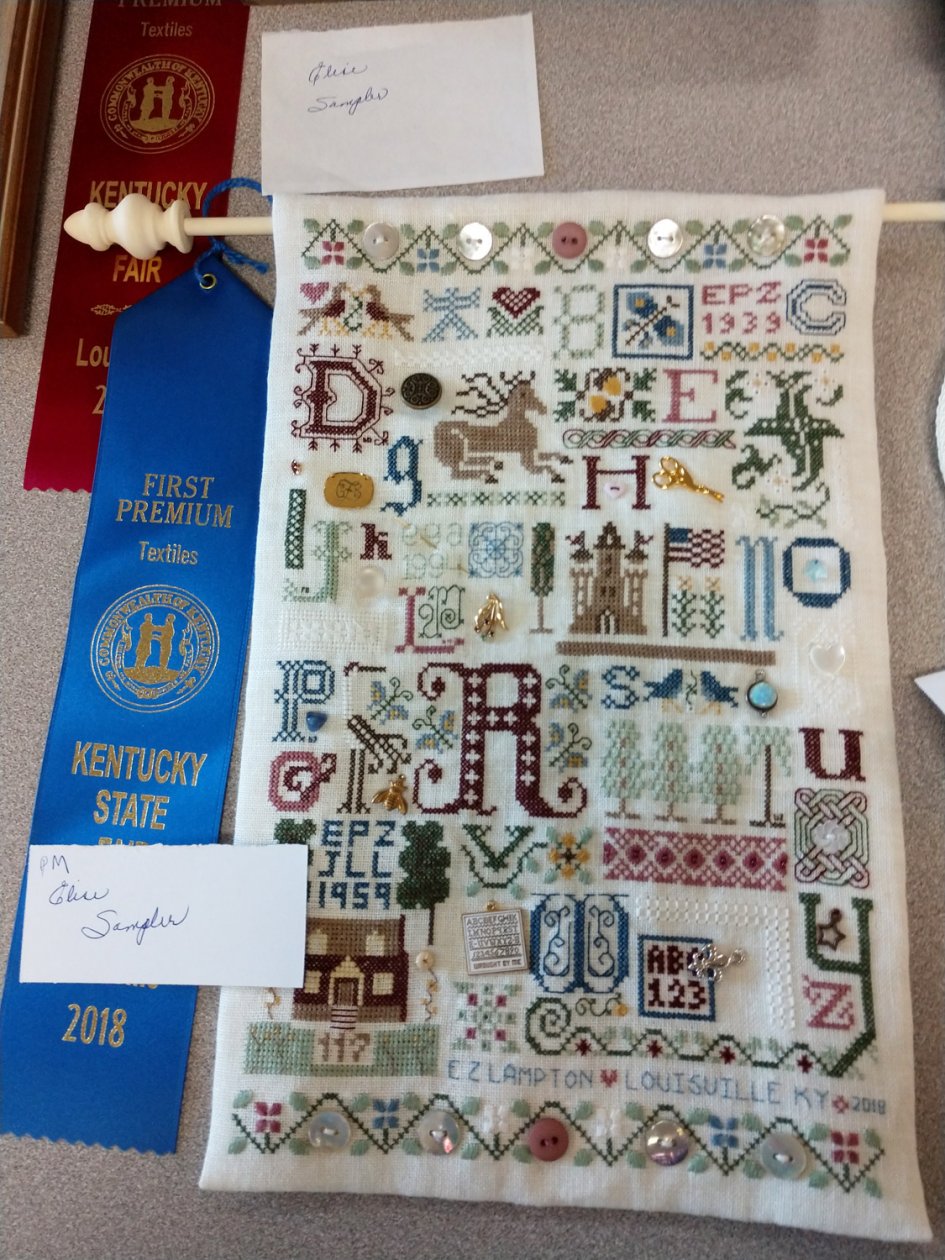 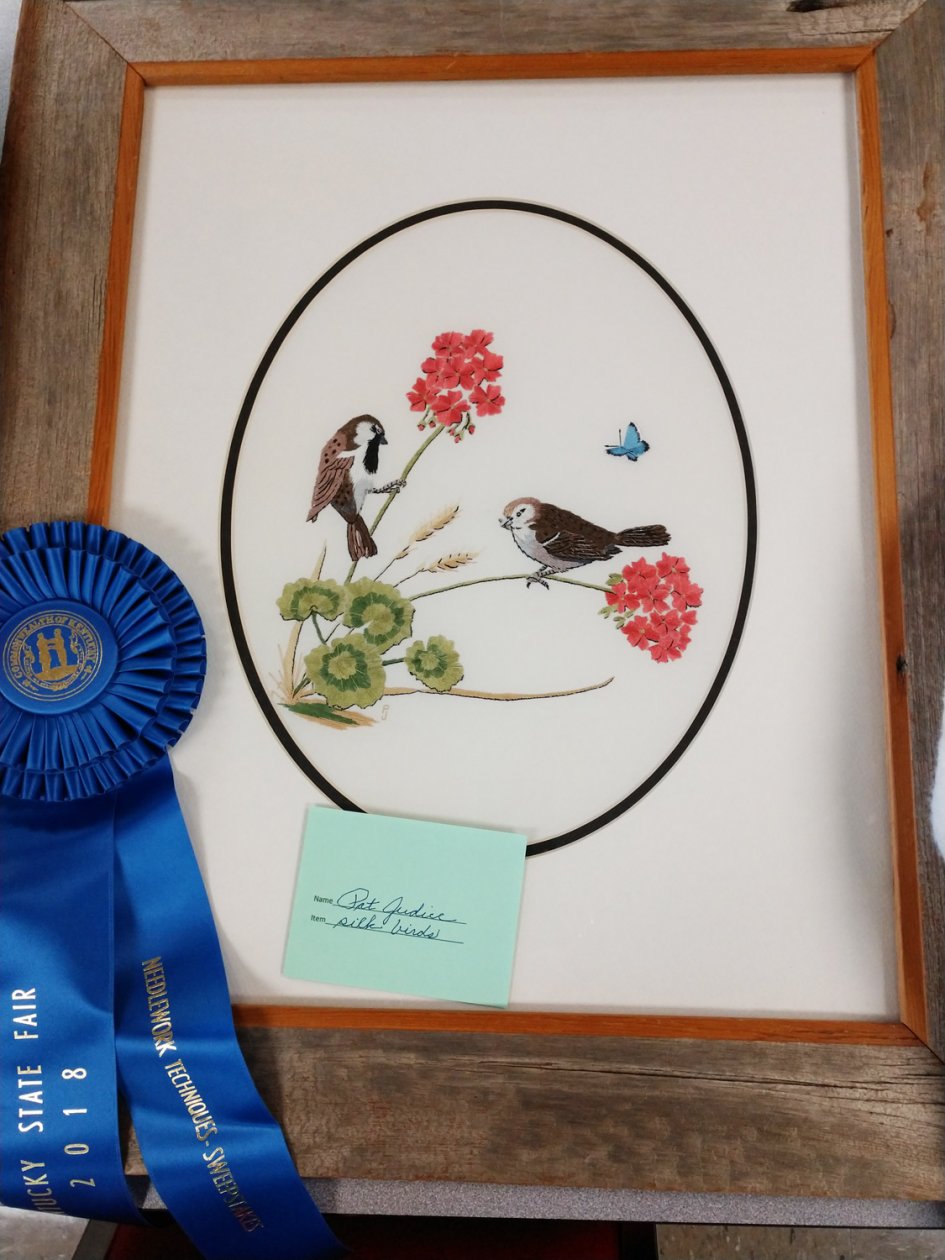 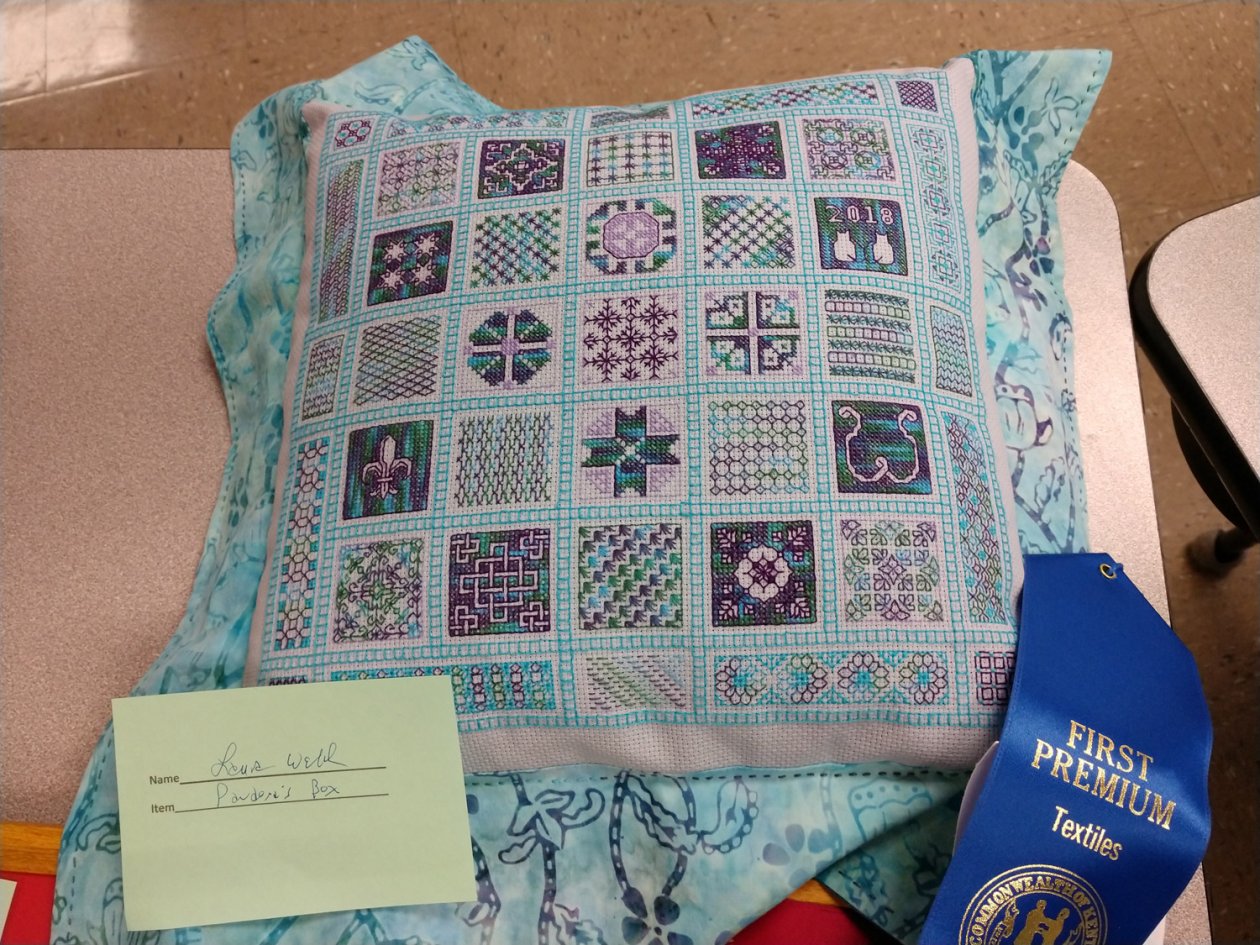 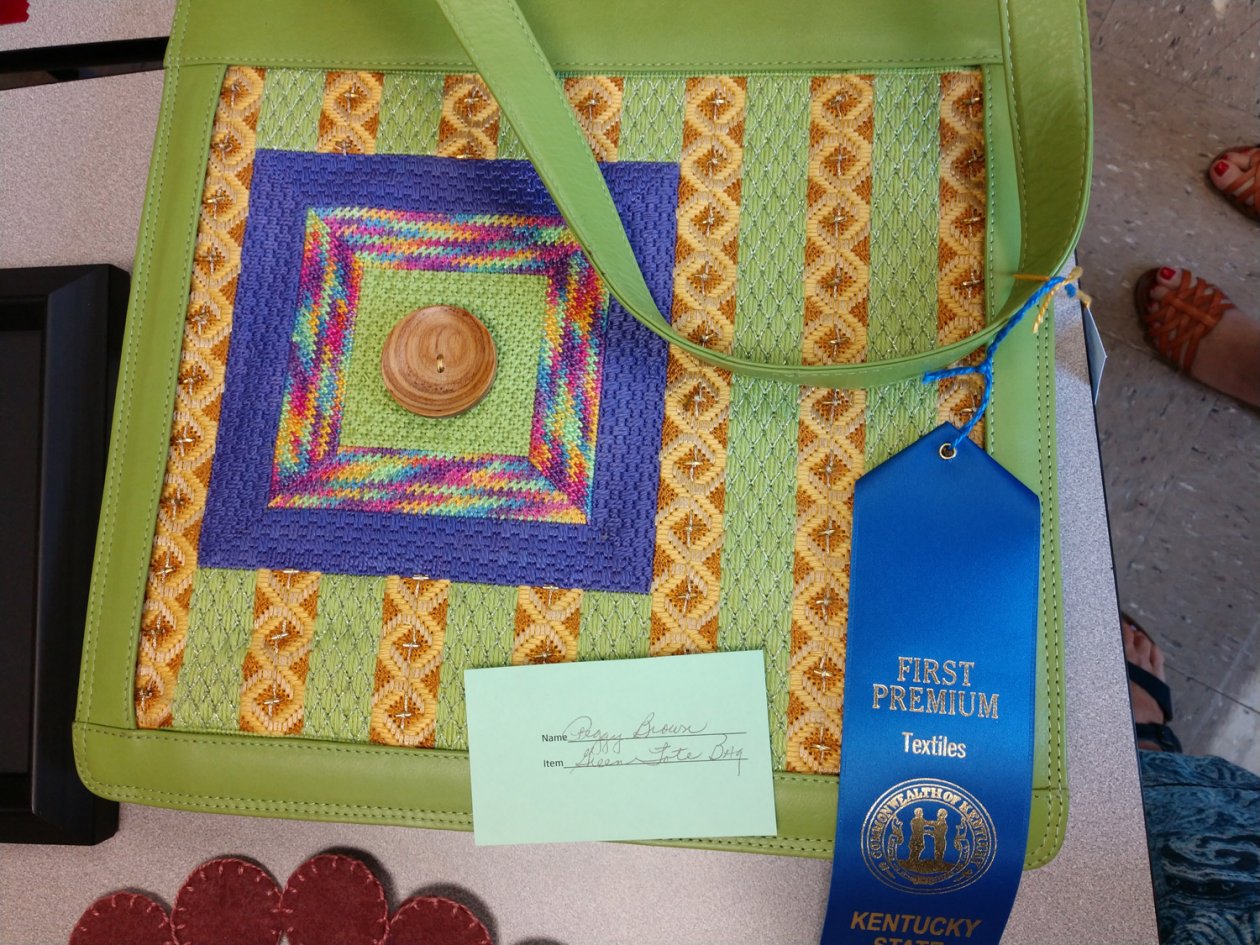 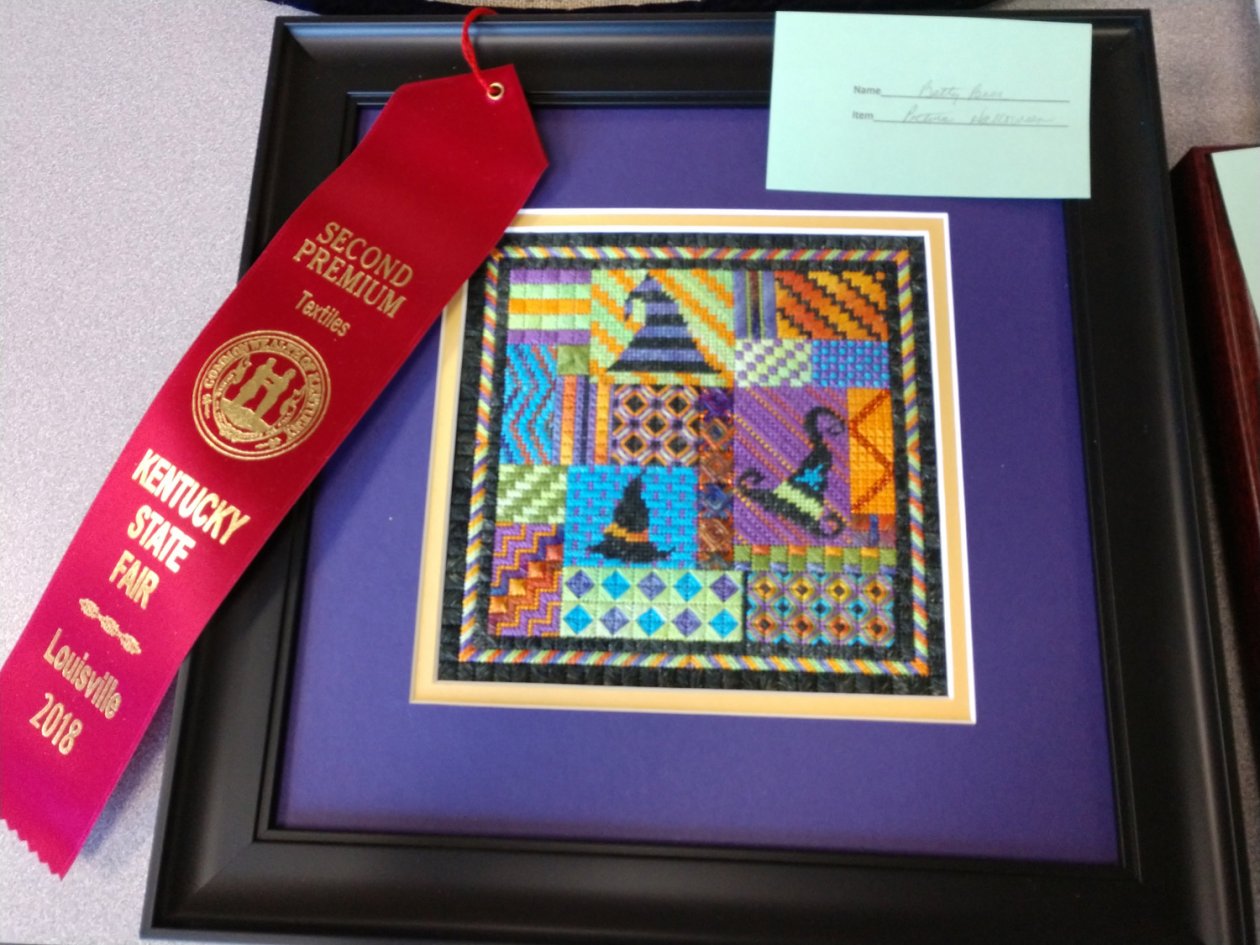 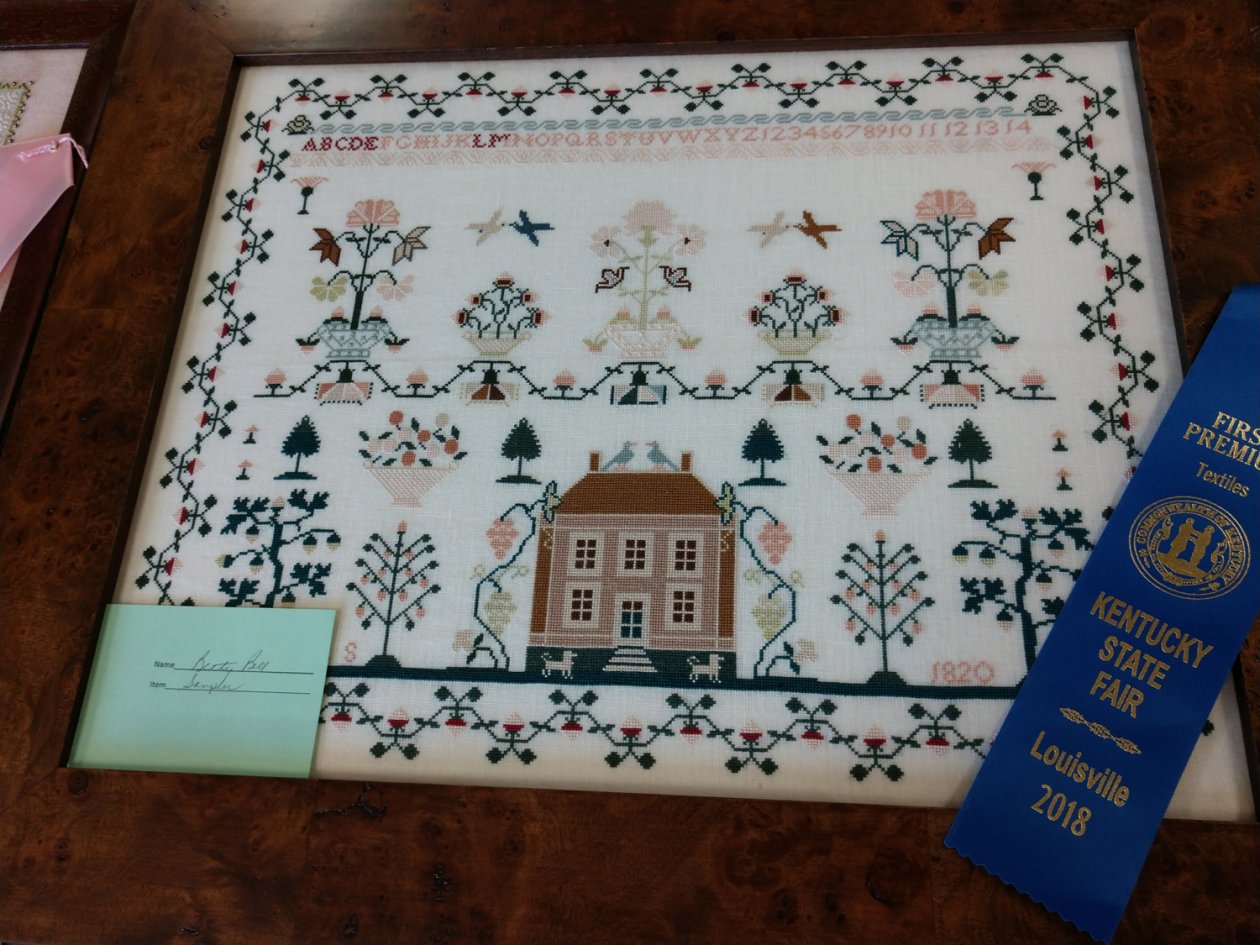 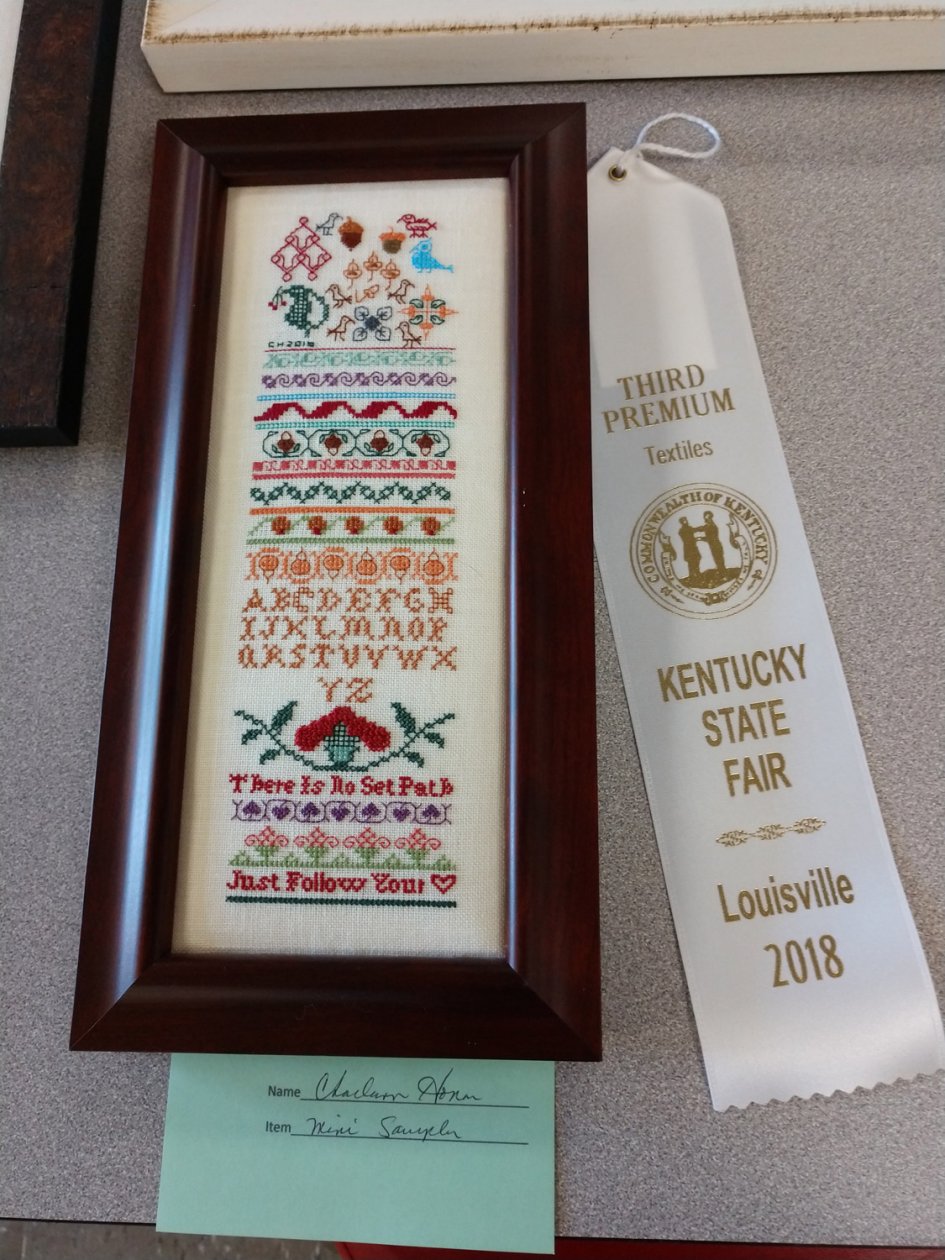 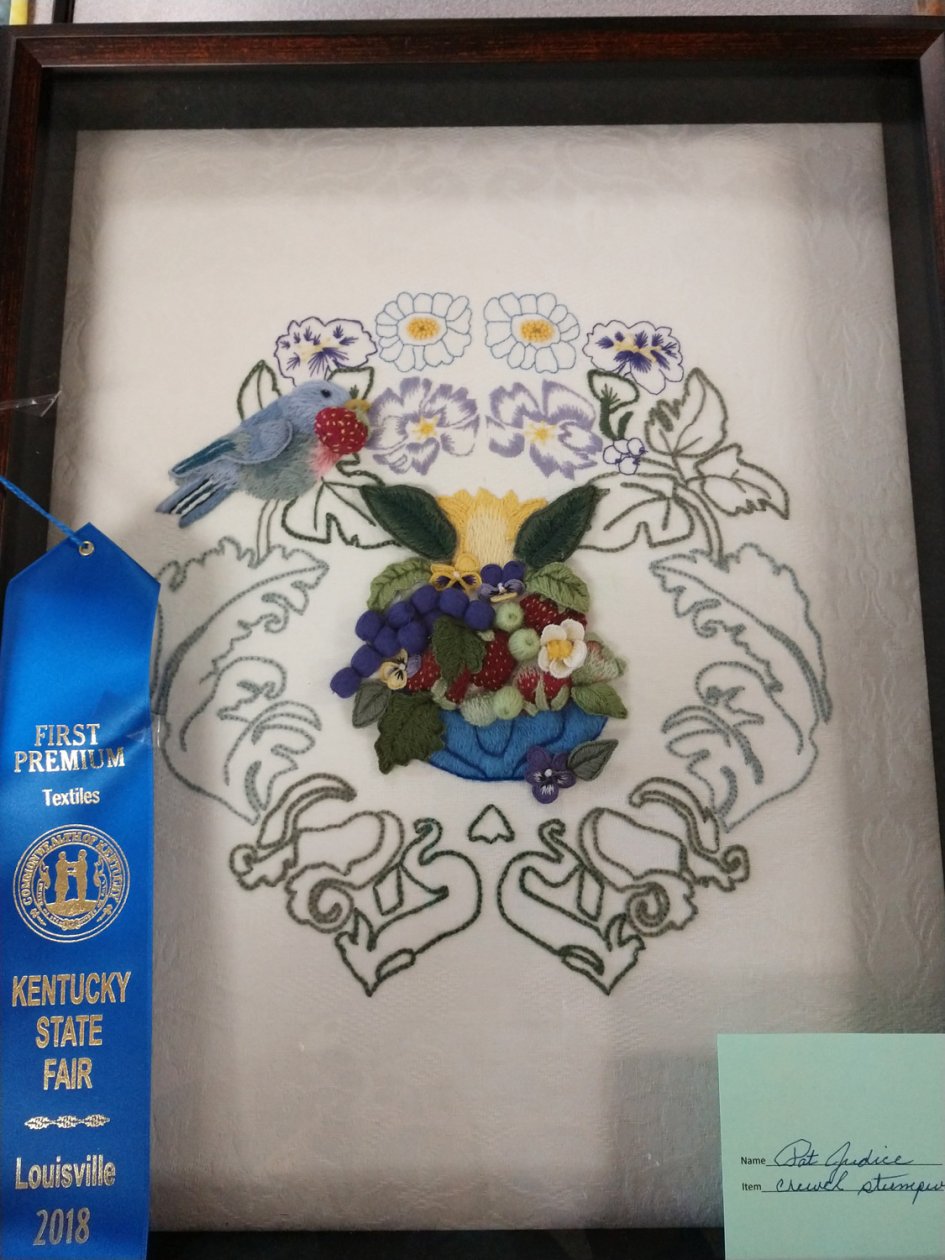 Come stitch with us in New York City at our National Seminar: Broadway Bound! Come see the classes and learn more in the Events section. Dismiss