#EGAStitcher Kathy M. at @baysmtn_ega is celebrating Christmas in June! Or, she's getting ready for the EGA Holiday Tree (we hope!). These beaded Santas designed by Jim Shore are adorable. Remember to tag your posts with #EGAStitchers so we can see what you're making!
Happy National Upcycling Day! Check out one of our most popular articles, an introduction to visible mending, highlighting imperfections in a creative, eye-catching way! Find on the #linkinbio.
Now open for registration: Avondale, an exploration of a summer garden using basic crewel embroidery stitches in interesting combinations. This group correspondence course is available for individual registrations for a limited time. Learn more: https://egausa.org/lightning-rounds/
Rebecca Levi's embroidery focuses on "ideas of American domesticity and desire, subverting the norm with the unexpected." She's had pieces featured in the book "Queer Threads" and has been featured in artist's exhibitions showcasing queer embroidery. The above piece is from a series of embroidered works called "Flower Beards." Learn more about Rebecca's work on the #linkinbio.
Did you know that if you're an EGA member, you can now access Needle Arts Magazine online? Learn more about this recent exciting development on the #linkinbio!
Self-proclaimed embroidery addict and #EGAStitcher @dr_kristi is creating a detective embroidery series. She's currently working on Sherlock Holmes, but here are her finished Miss Fisher and Hercule Poirot!

Some of our members are currently in Mexico through February 10 participating in one of our Extended Study Programs. Kathleen Weston, EGA member from our Turquoise Trail Chapter in New Mexico, has been sharing reports of the groups’ experience so far and some great photos. We will continue to update this post with more photos and news as they become available.

Veracruz is the second oldest city in Mexico, with Mexico City being the oldest. She is on the East coast of the city. We’re staying at Gran Hotel Diligencias, which is across from the main plaza or Zocolo, and Cathedral. Diligencias mean stagecoach. This was the location of the original stagecoach station. The coach to Mexico City was 23 days! Yikes!

There was a Marimba band playing at the restaurant across the street the other night. I’m not sure what it is about Latin music, but it sure gets my blood boiling.

We all know how fragile textiles are, which is why there are few remaining scraps. Thankfully, the Olmeca of southern Veracruz State were masters in ceramics, recording the headdresses and clothing they wore. The woven wrap skirt, the Huipil and the Quzyquemetl, which are two rectangular pieces stitched together to from a poncho style garment. The Huipil creates a top or dress using pieces from a backstrap loom. Because the loom is so narrow, each side is 3 pieces stitched together with slits left open for the arms.

We had the honor of visiting Escuela Superior de Arts de Veracruz (Higher School of the Arts in Veracruz) and viewing a small selection of the ethnic clothing collected by Rene Ramirez Ordonez, an instructor at the school. He started collecting the clothing at about 12, using his allowance. Each piece is accurate to the region and tribe it comes from. Again, we saw the woven wrapped skirt, the Huipil and the Quzyquemetl consistently used over and over again in the collection. 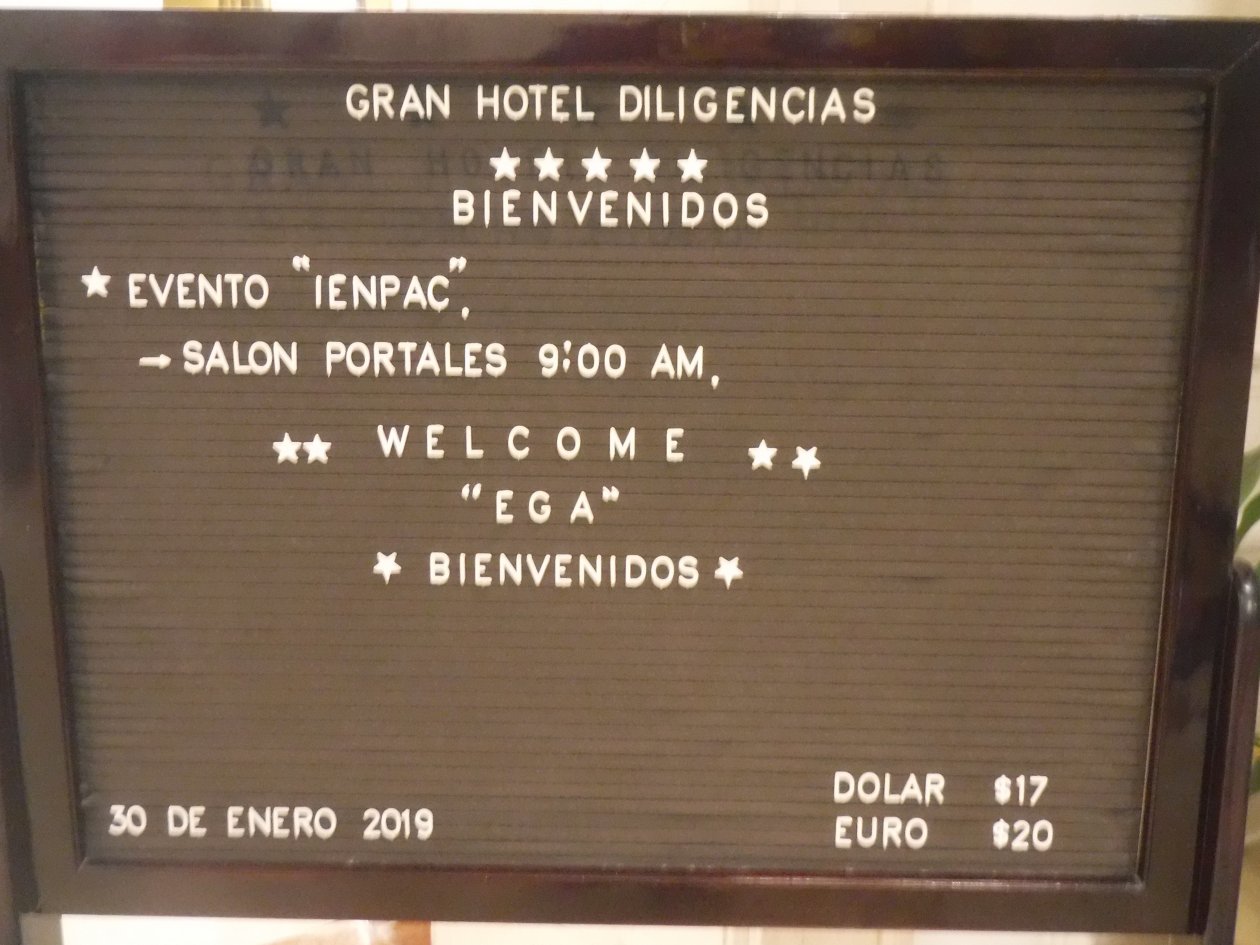 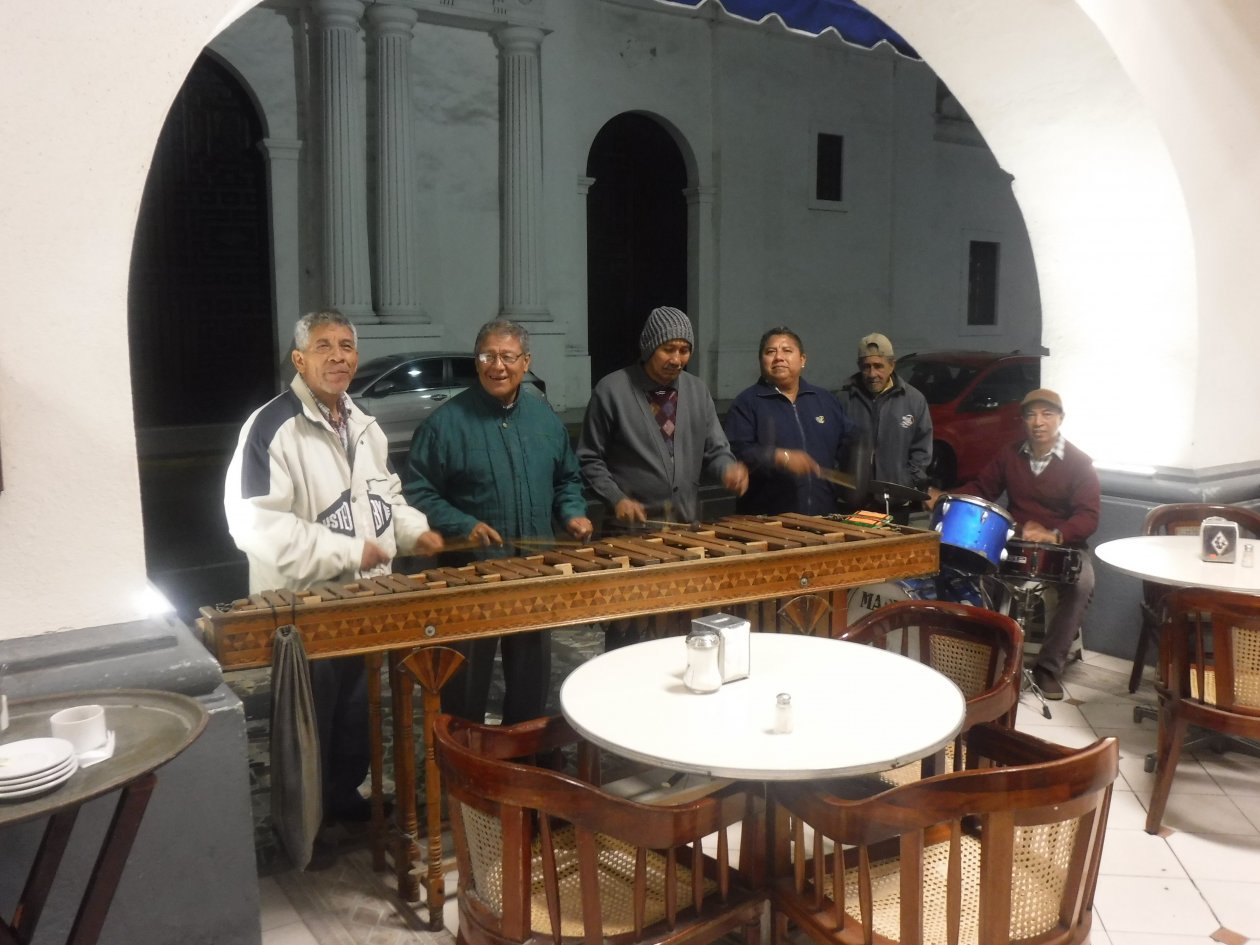 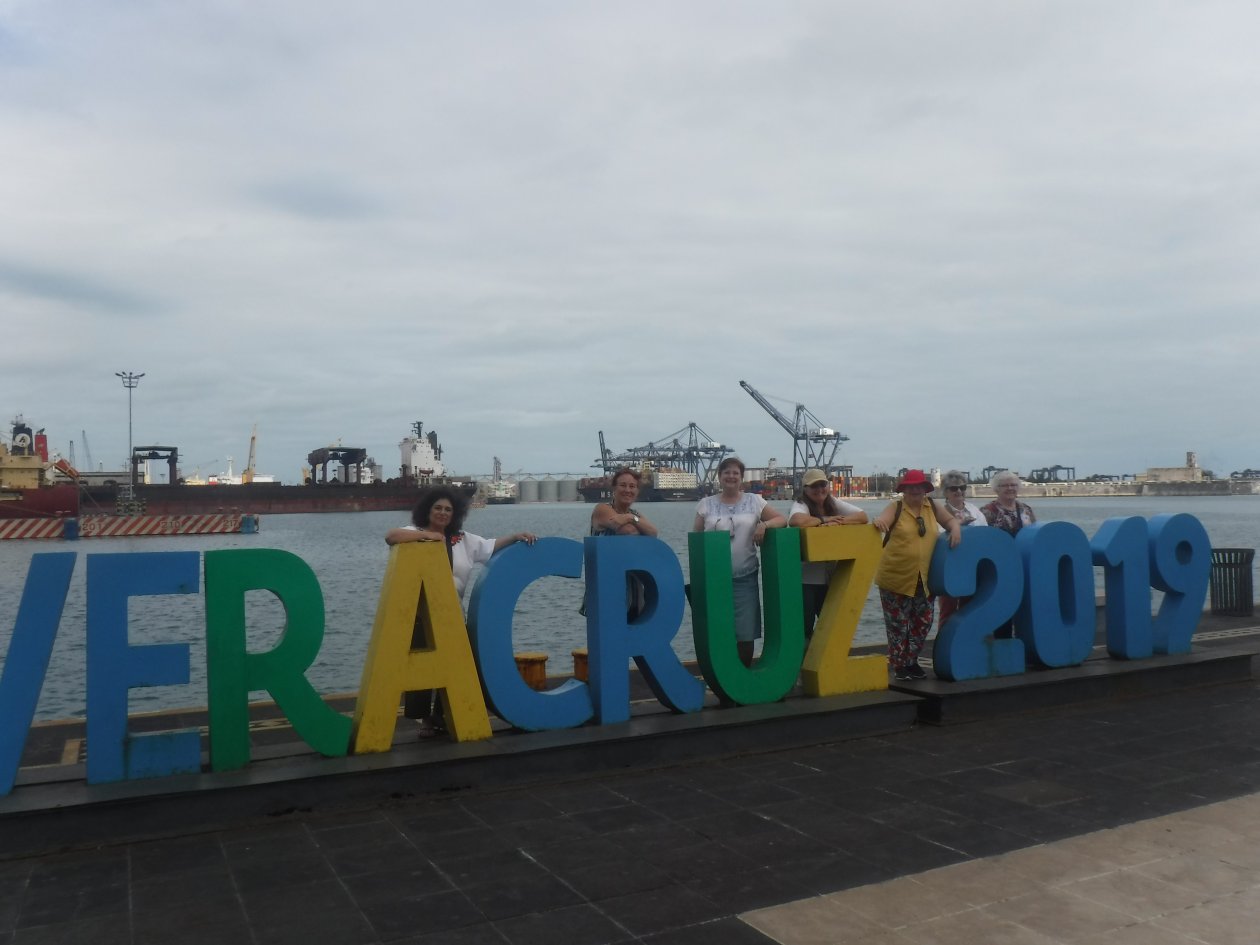 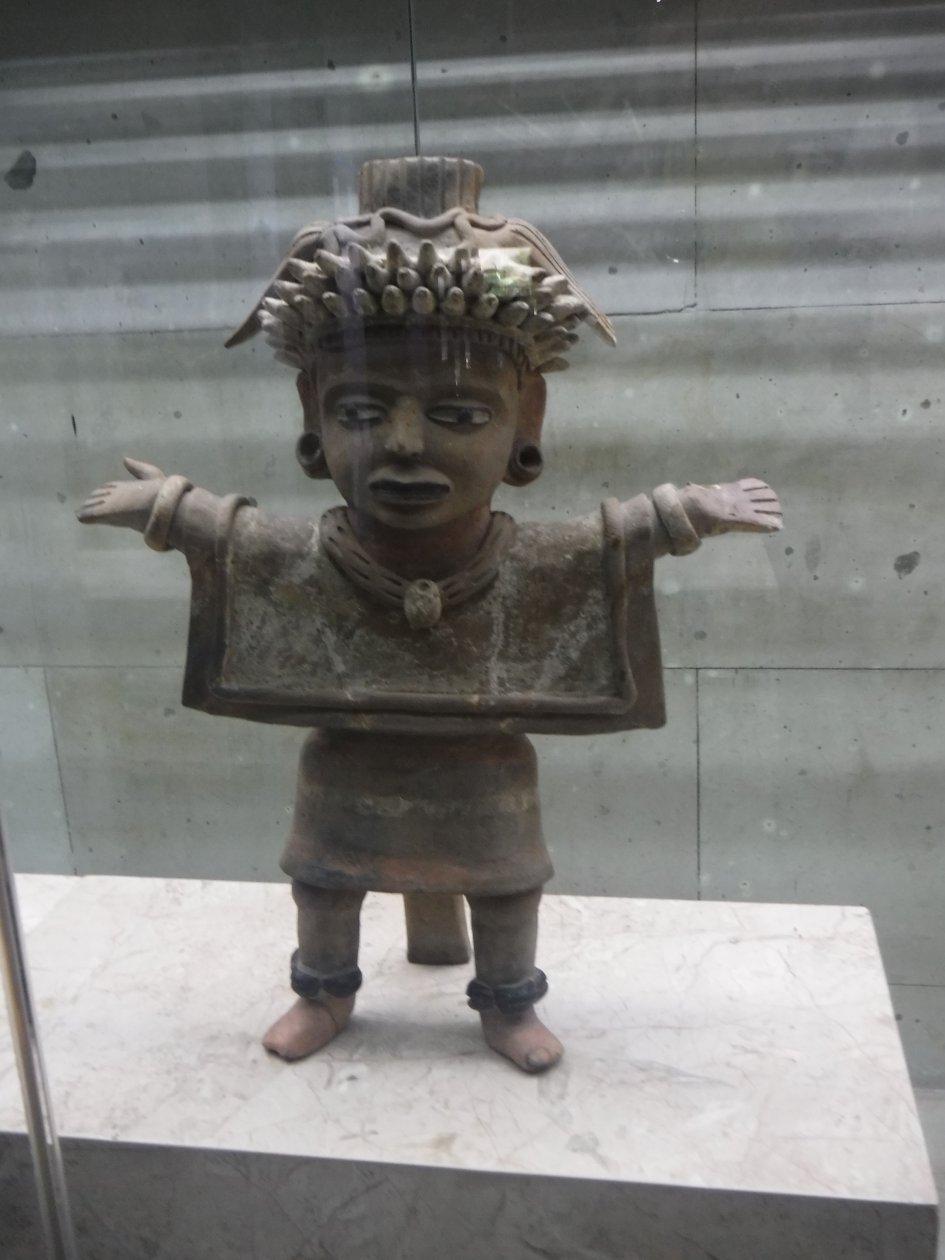 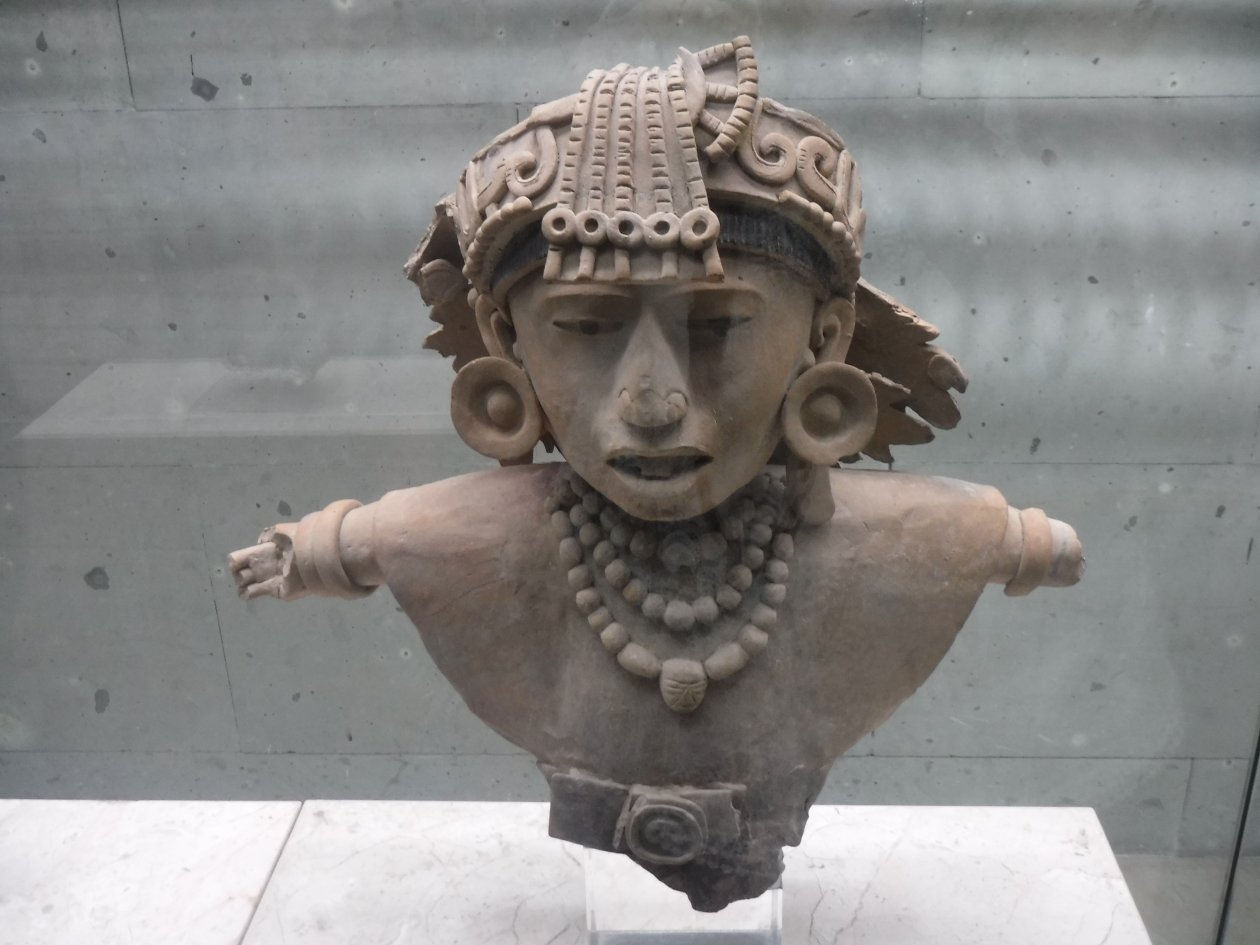 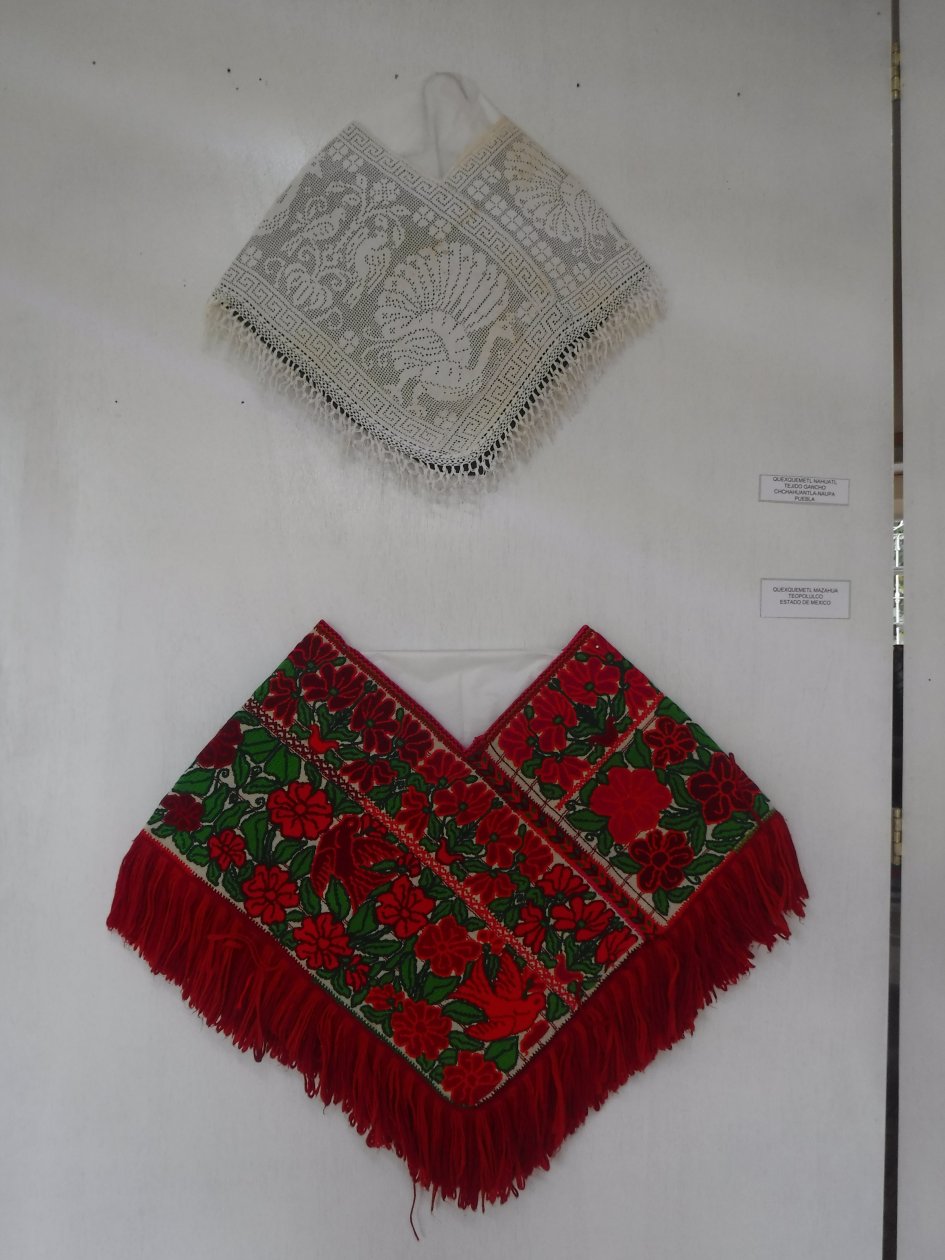 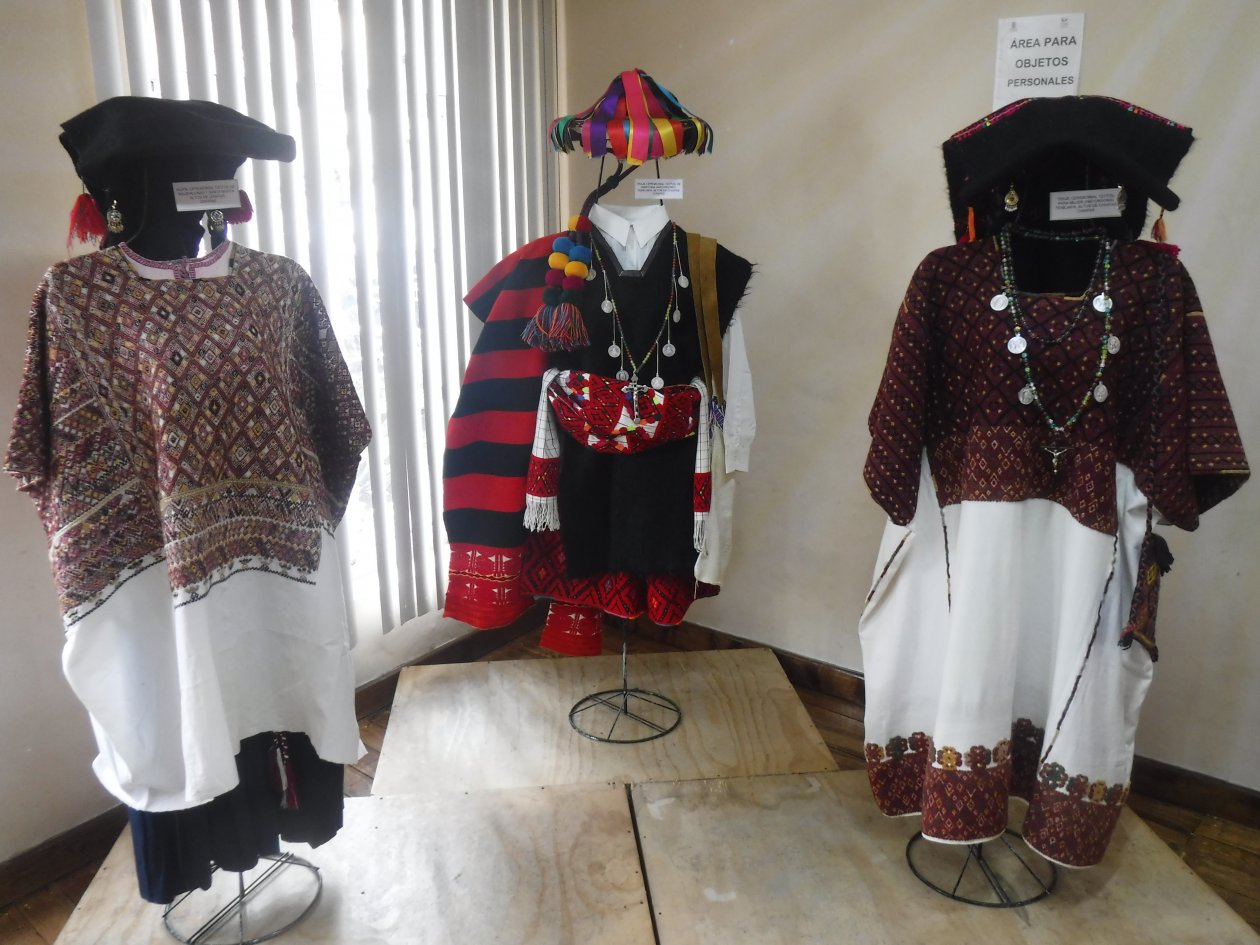 Today, we were treated to a fashion show of Ethnographic clothes collected by Professor Chucho.

After we checked into the hotel in Tuxtapec, relaxed and unpacked, we headed downstairs for a fashion show of Masoteco embroidered dresses and Chinateco Huipils woven on backstrap looms. We were in heaven looking at the very different styles, touching, looking at the construction on the backsides, learning about the motifs. Because this town doesn’t identify with either of those cultures, they weave and then embroider on top, so a blend of both. This town is technically part of Oaxaca, but because they’re cut off from the rest of the State by a mountain range, they’re completely ignored by the government and had no traditions of their own. So, a woman wrote music and choreographed a dance, Baile Flor de Pina, Dance of the Pineapples to showcase the Huipils and pineapples. The models, all high schooler’s, cute as bugs, danced it for us and then we danced it together. Professor Chucho is the dance teacher in this part of the region. People come from all over to see the dance which normally has 36 women performing it and is quite a bit longer than what we saw.

If you’ll look at the white Huipil on the far left, you can clearly see the 3 panels connected by a ronda, which is decorative stitching covering the joining seam. 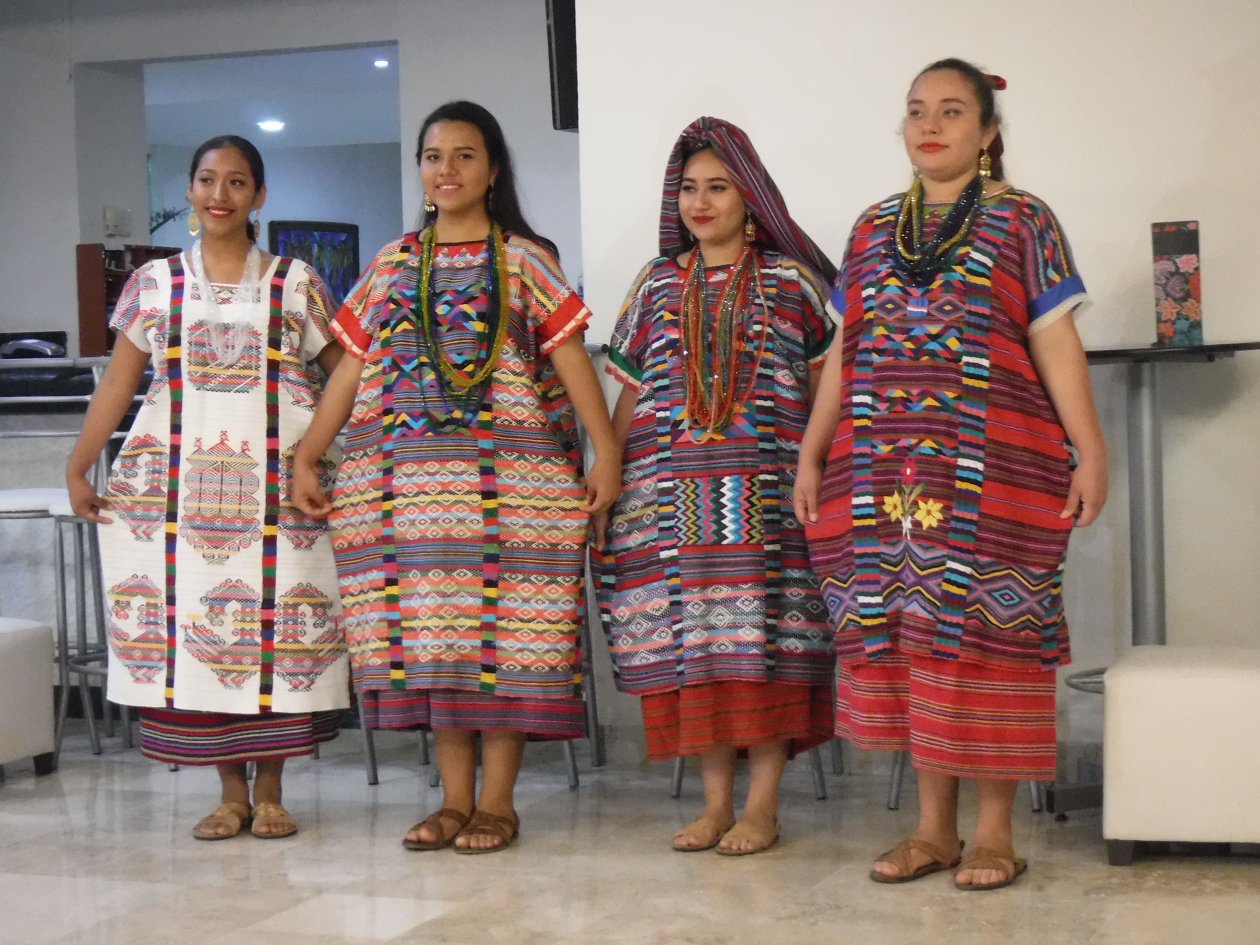 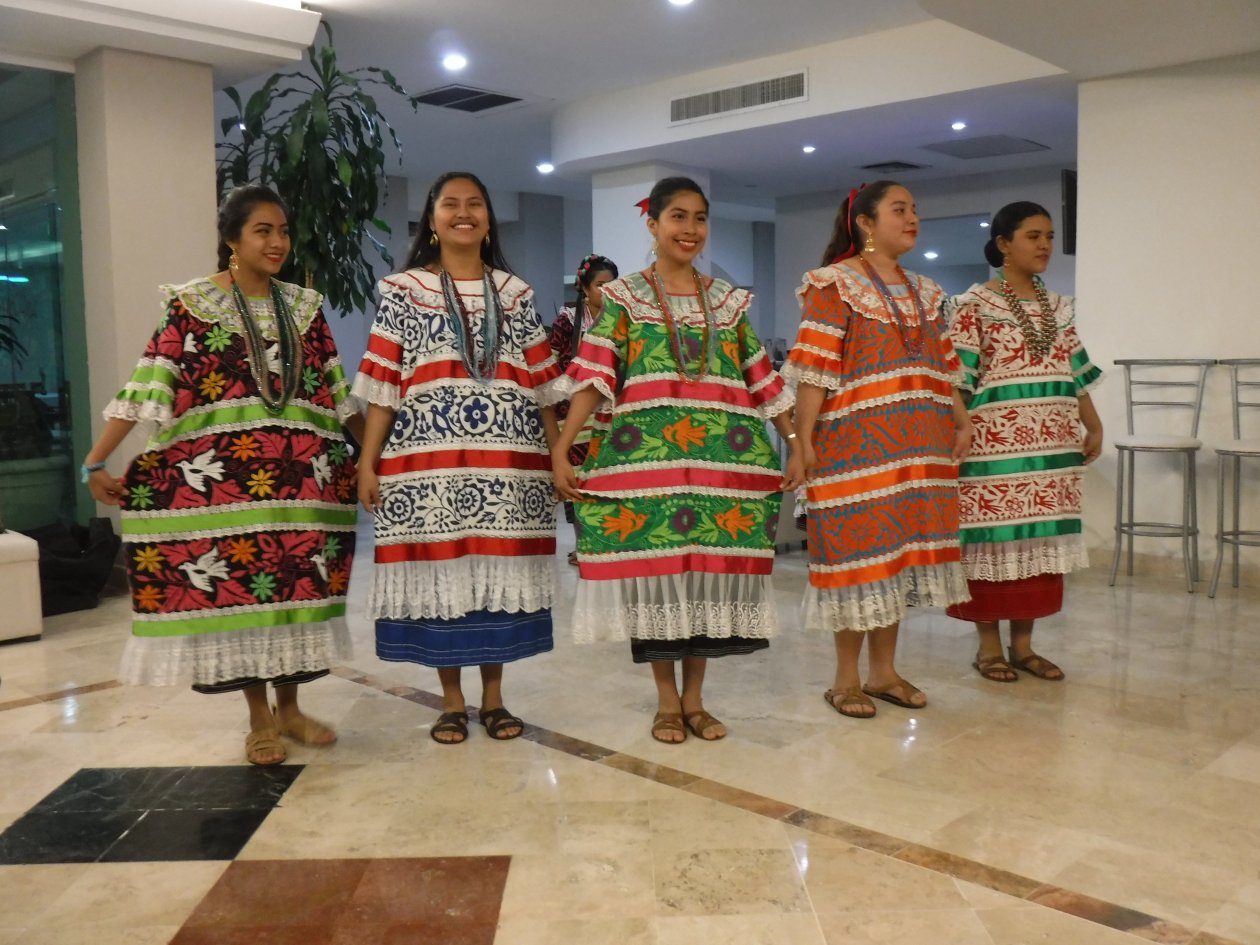 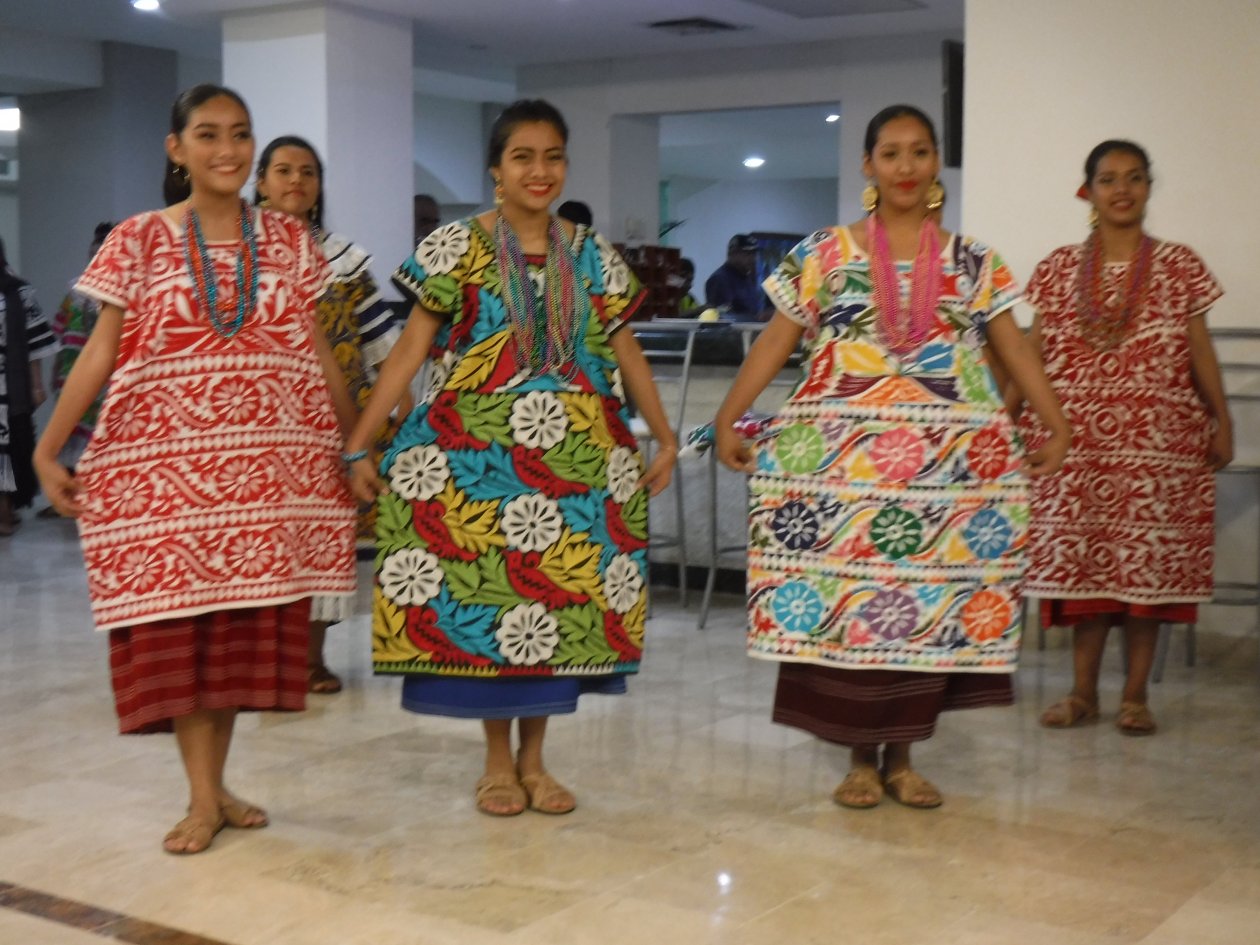 Back in the 50’s, they put 2 hydro dams in and filled up the valley that was inhabited with the Mazatec people. All of the people were relocated outside Veracruz City except for one group who moved to a large island, which was actually the top of a mountain. They’ve become rather isolated up there but do the most exquisite embroidery. I’ve purchased several of their pieces in the past, so I knew what was coming.

In the town by the dam, we loaded ourselves into launches and headed out to the island where we were met by the women, who were very happy to see us. These poor women are so isolated that they have very little opportunity to sell their items, which is a true shame, they’re just so fabulous! What I found so interesting, some of the women do the drawing of the patterns, some of the women cut the pieces once they’re embroidered and everyone stitches. I must be honest, this is hands down my favorite of all I’ve seen this trip and in the past. I truly love this work.

Then, we went to San Lucas Ojitlan where the entire town turned out to greet us. These women are Chinantec, the brocade weavers and embroiderers. Such a different and lovely style of textiles. 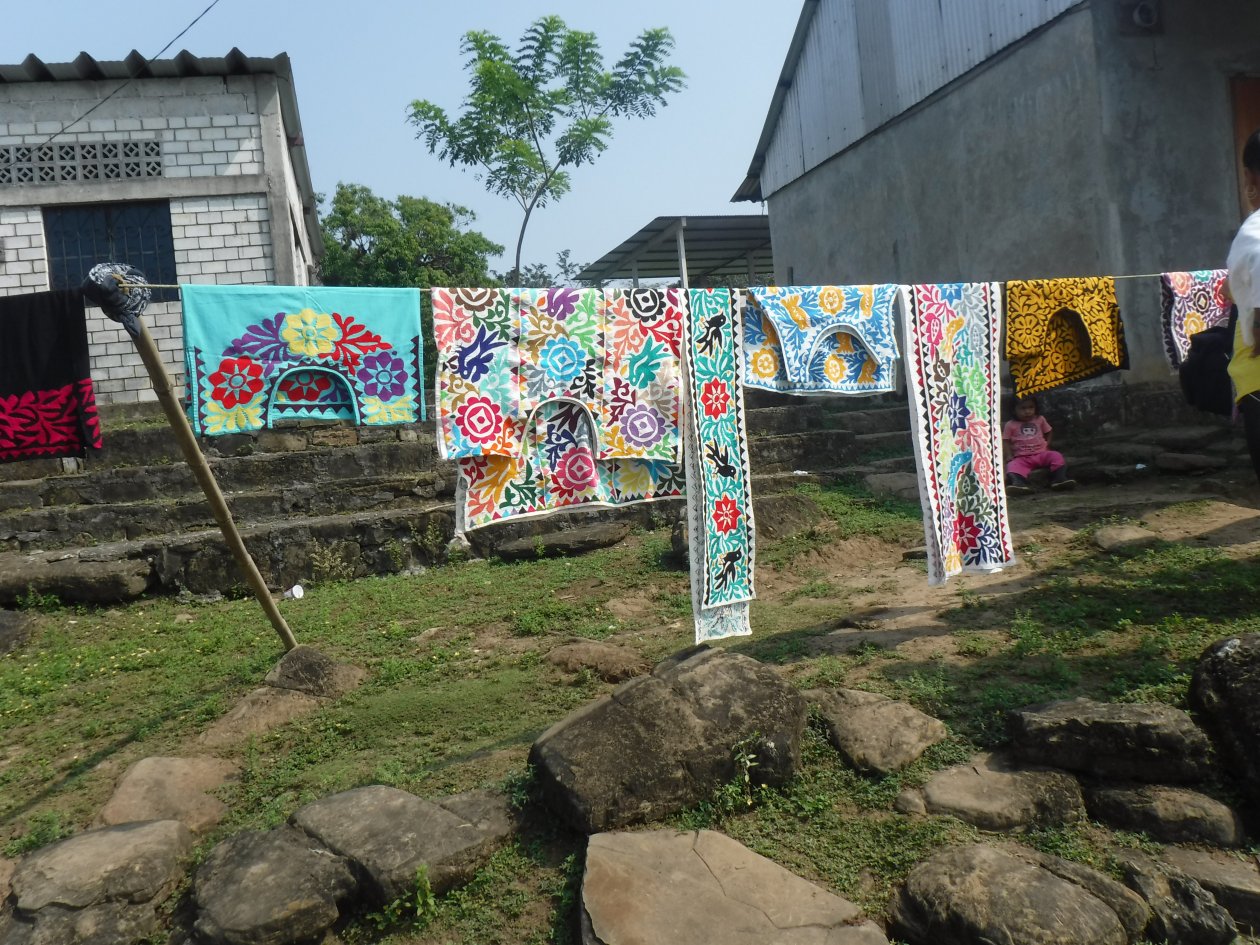 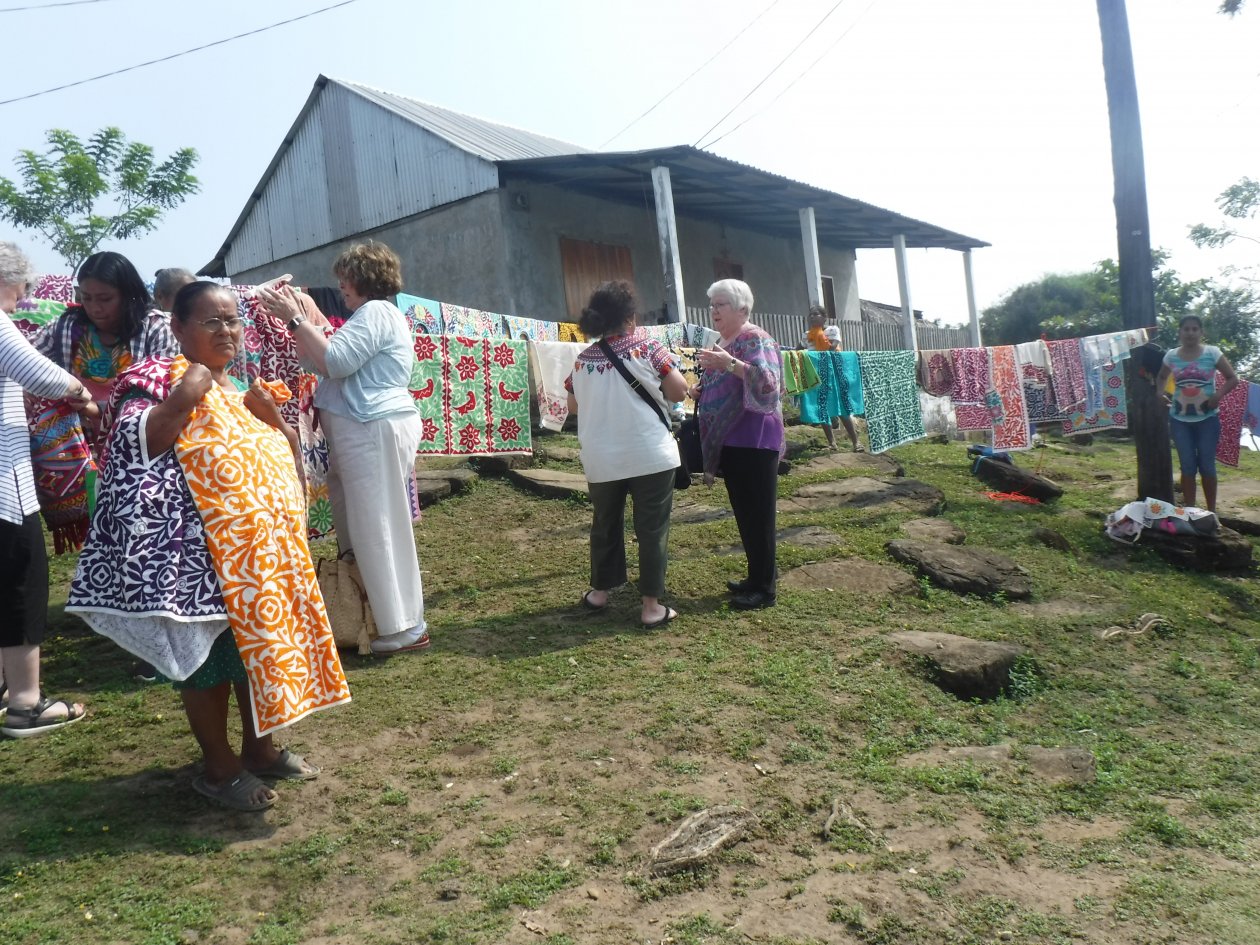 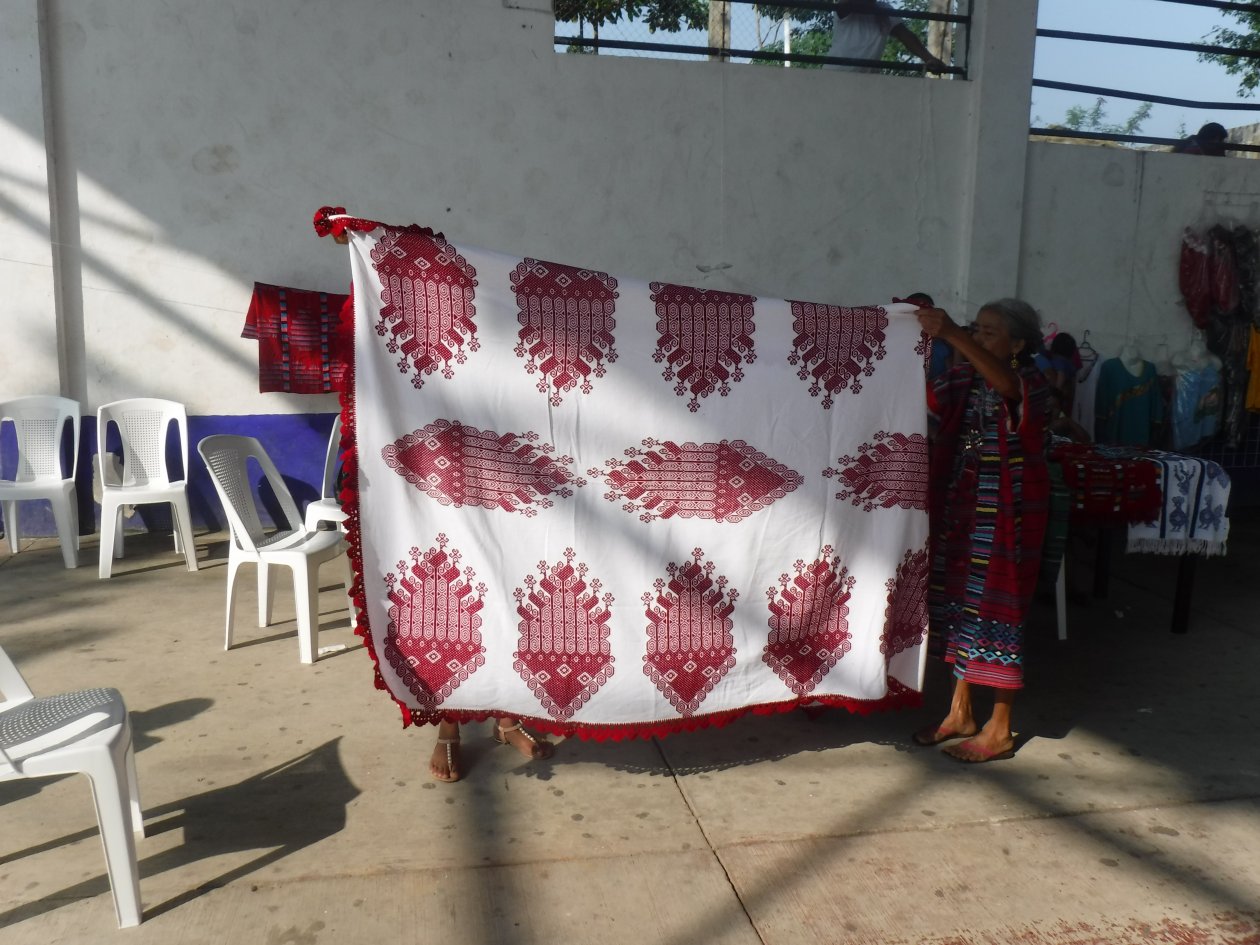 Last night, we had weavers come an show up what they make. They’re from a little village back in the mountains. I bought some wool buttons dyed with natural dyes and strung. I absolutely love them. A young man, Miguel A Somos Aguilera made a documentary on the Nahautl women starting with sheering the sheep all the way through carding, spinning, weaving and selling. They use natural dyes, but lost the use of Indigo until a German woman came and taught them again.

Because selling is so important to them, some of them will travel to Mexico City, Germany, and Italy, which allows them to see what the market wants and will pay for. He said that he loves textiles and wanted to show the world how important these women are. “Voices from the Loom” is the short film and was so well done that he won a prestigious award from the Mexican President himself last year. He and one of the women will be coming to the Silver City, NM festival again in June to sell and promote the women.

Silver City is a pain to get to, but the festival is lovely. They invite only the very best artisans from Mexico and the quality of their goods is superior. I hope you’ll think about coming. 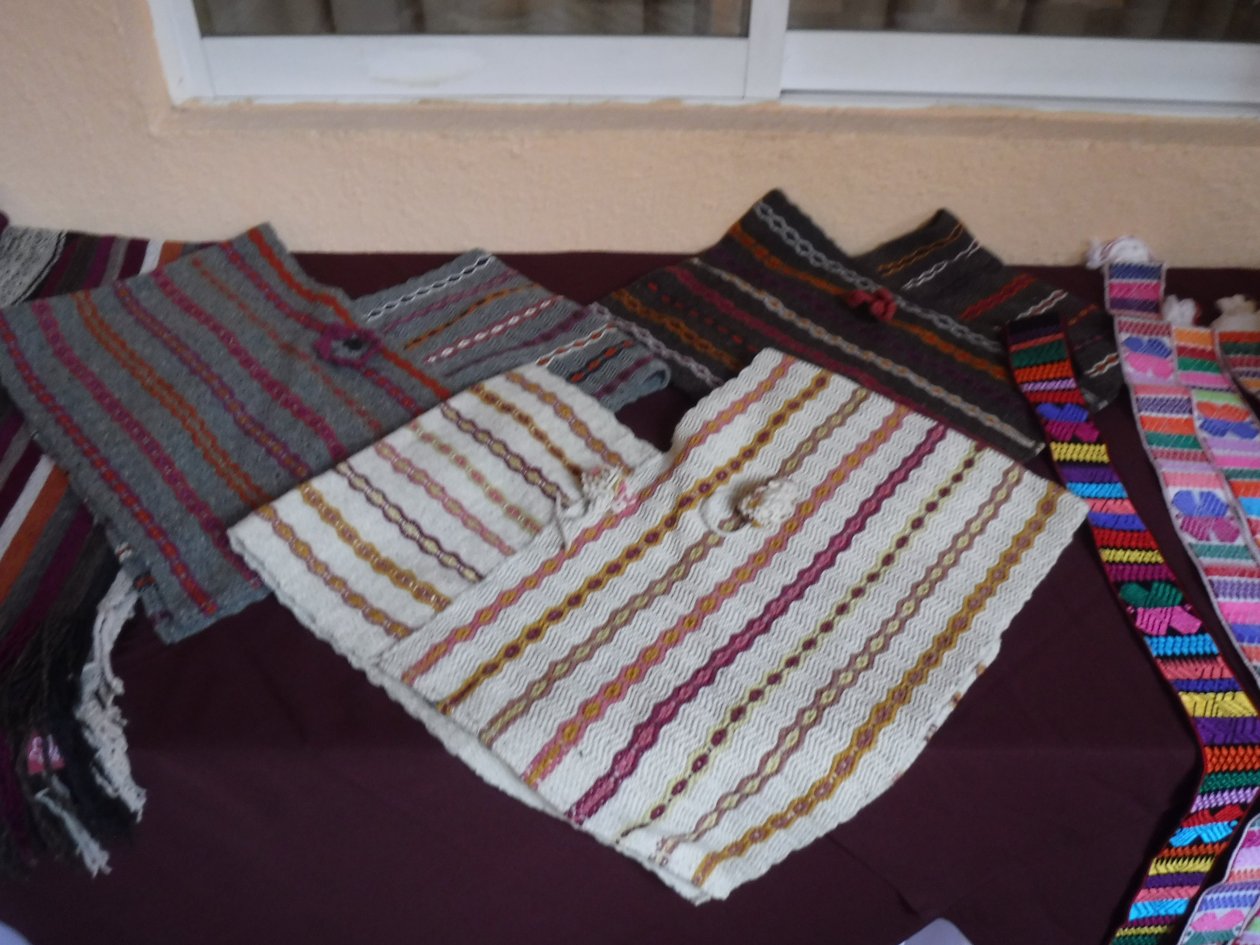 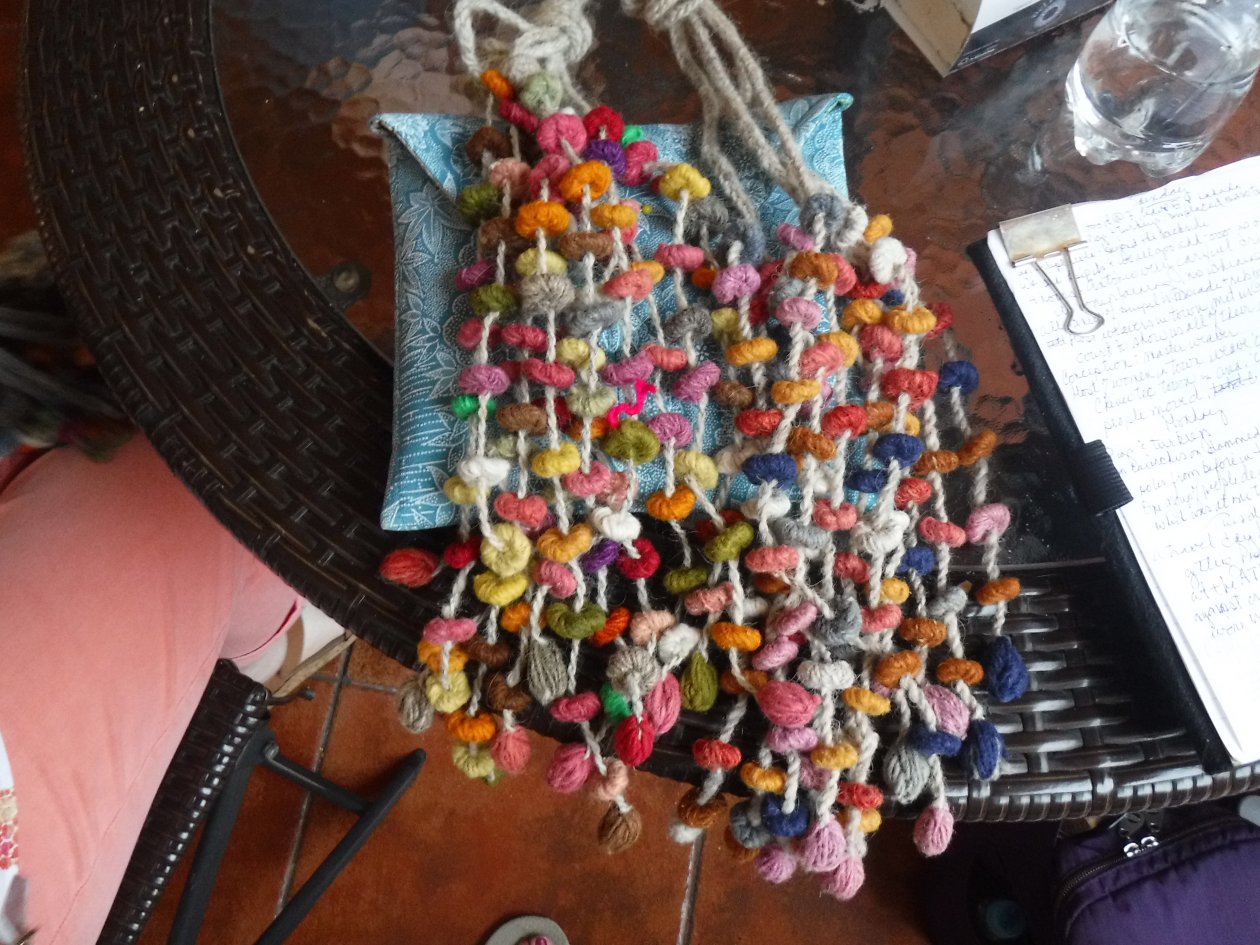 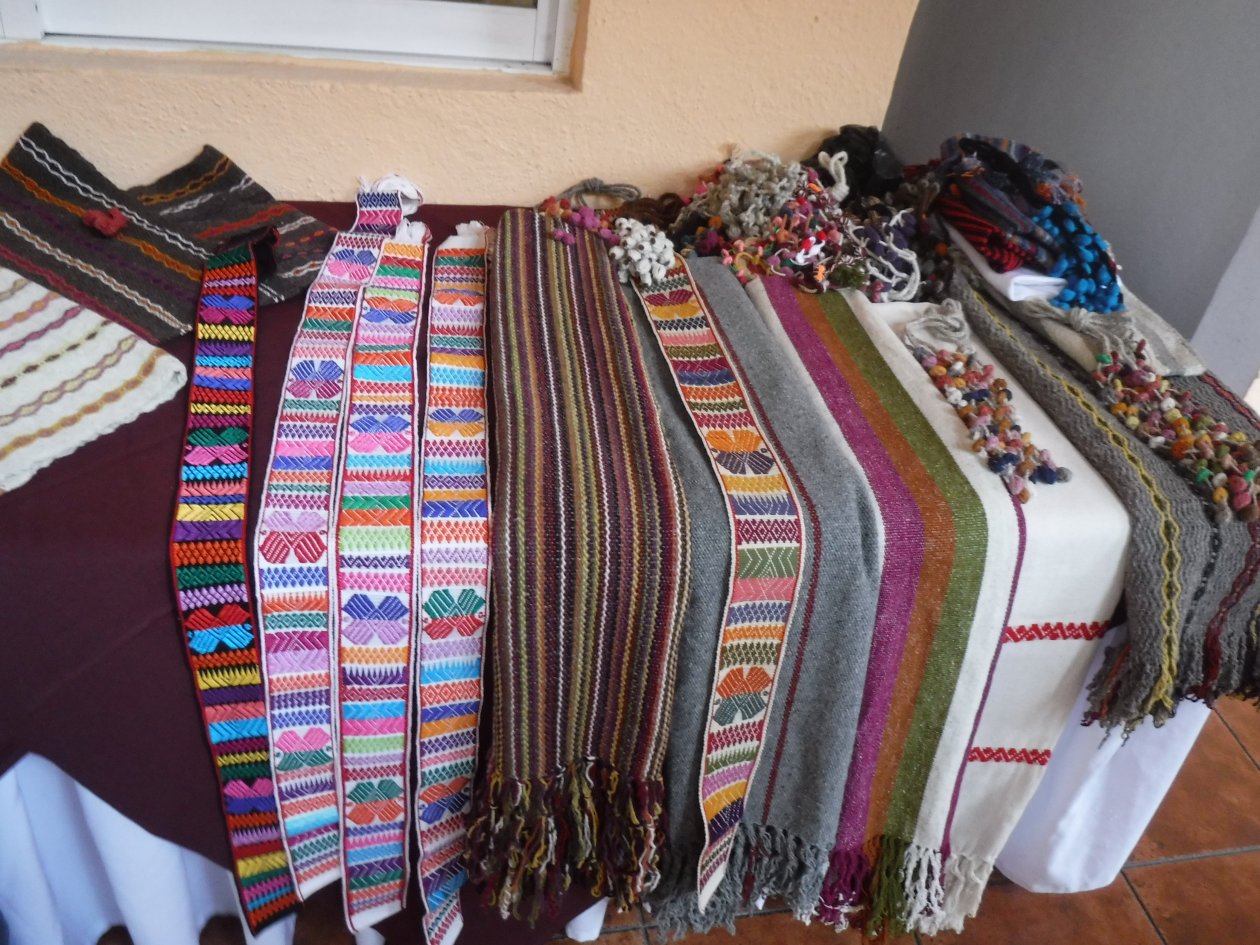 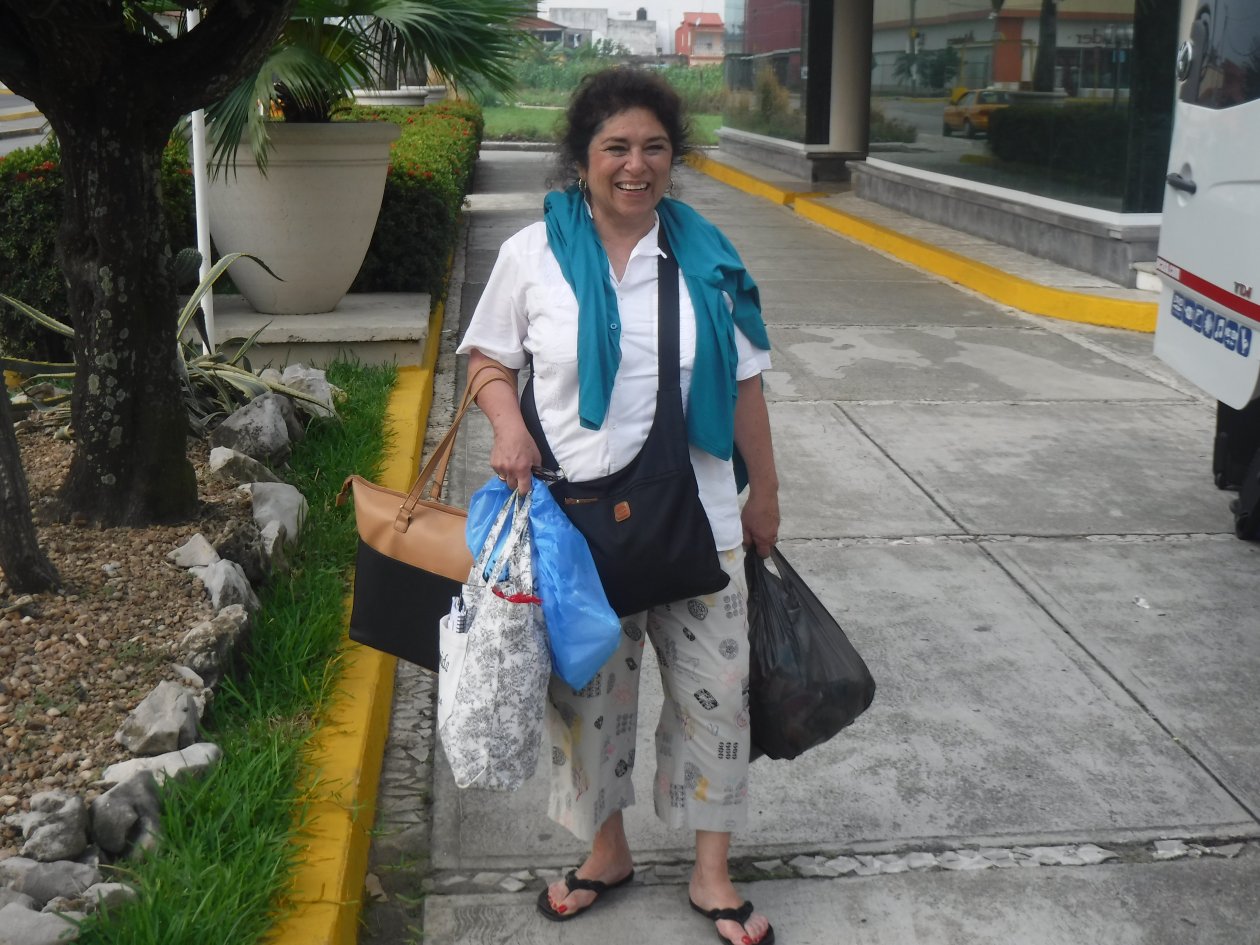 Our first stop yesterday was at the Museo de Agua, the Museum of Water. We were here two years ago and it’s an excellent education opportunity. The nice difference this year, they had an expoventa there on the grounds, so we were able to shop. Lovely work. Some of the work we saw 2 years ago in their home village and I bought one of the heavily embroidered blousas then. There was also a table of straw weavers there and I bought a couple more necklaces, but believe it or not, that’s all I bought today.

Next was a tour of the Museum. They are working with communities that have a shortage of water to learn better conservation methods. One of the problems is soil erosion and the interesting part of that is that it’s caused by the goats eating everything. Sounds like dinner to me!

The other part of their mission is reintroducing Amaranth to the indigenous people. Amaranth is a seed that they used to cultivate along with corn, that was high in protein and made up a goodly portion of their diet. Then, the Spanish arrived and introduced beef, pork, and chicken to their diet, which wasn’t healthy for them.

As we did 2 years ago, we had a lovely lunch based on Amaranth. They’re very creative with the product and we suggested they write a cookbook to sell. These gals were so cute, they just giggled. 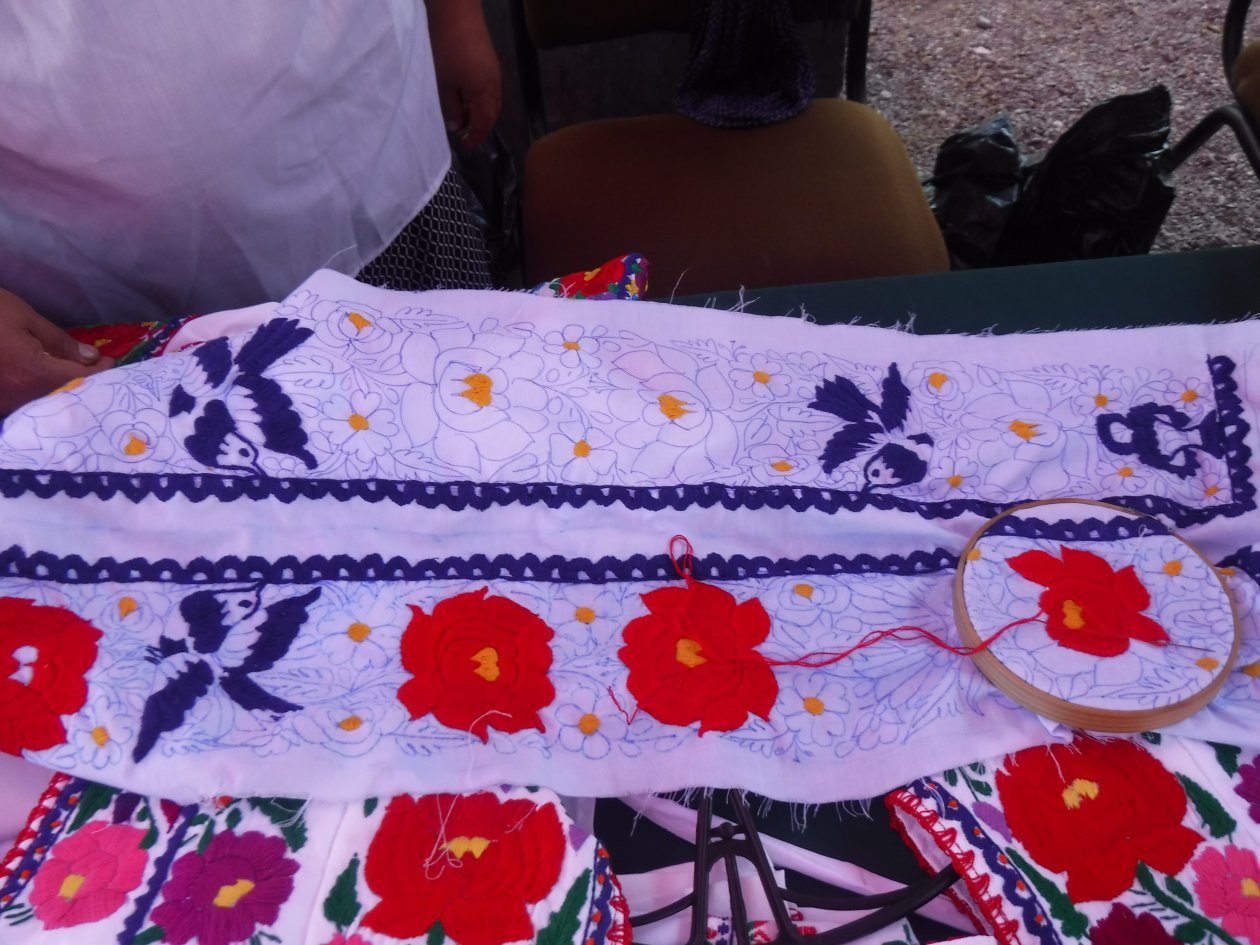 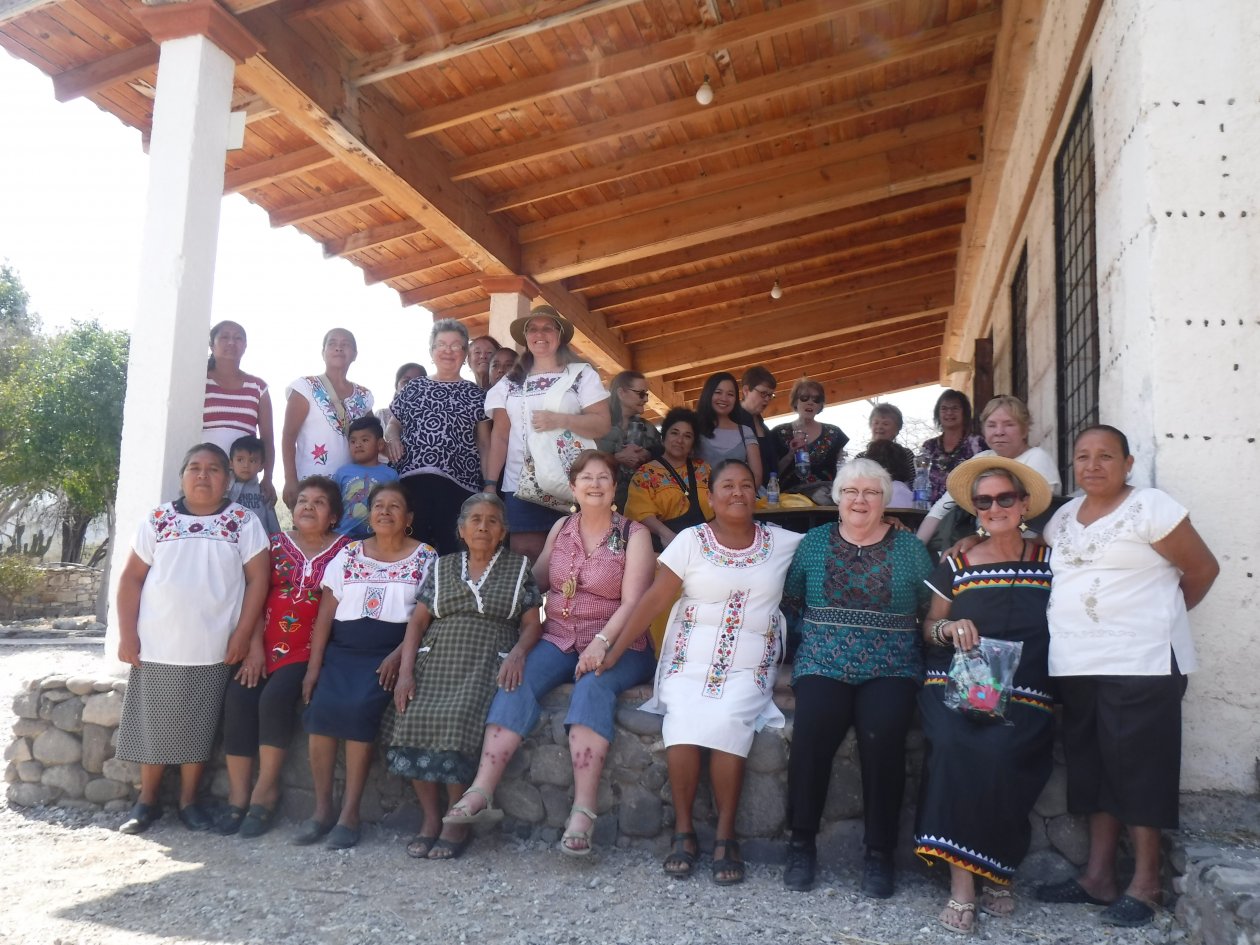 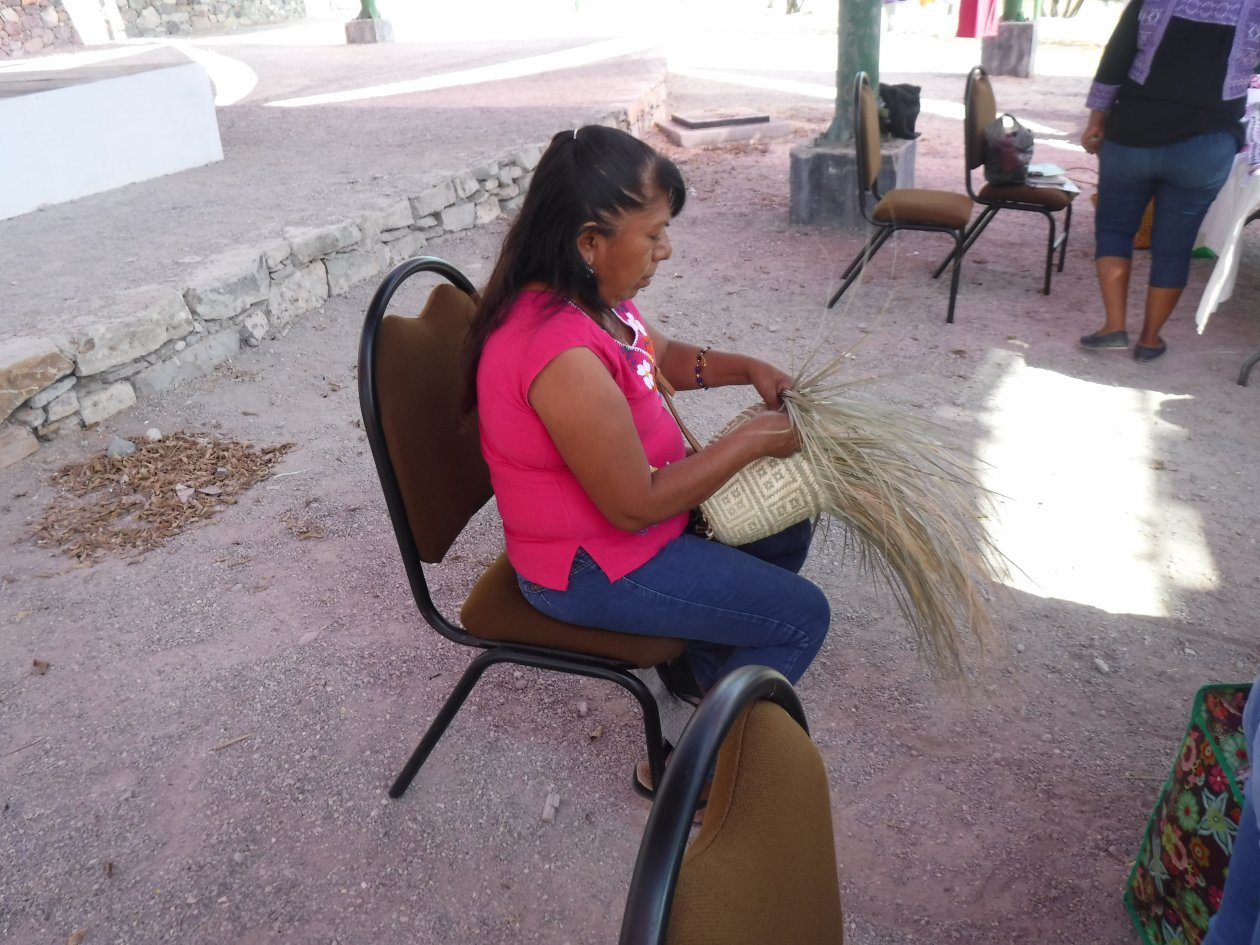 Yesterday, we visited one of my favorite museums, Museo Estatal de Arte Popular de Oaxaca. They sponsor an exhibit of work done by youth. Ceramic’s, wood carving, weaving, embroidery, multi-media, everything is first rate quality. Pieces are for sale, so you can add to your collection, but you need to know that nothing leaves the exhibit until it’s over. 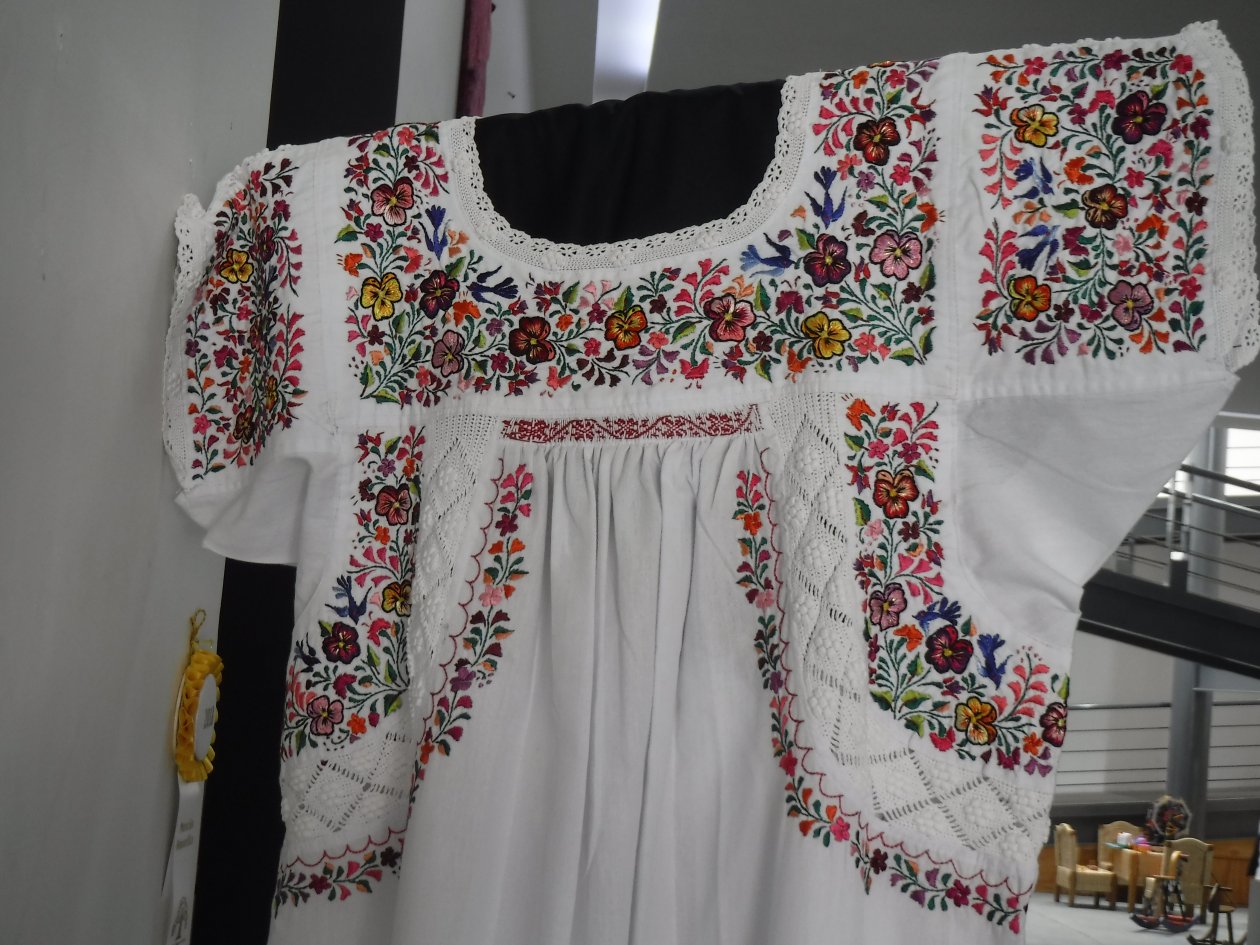 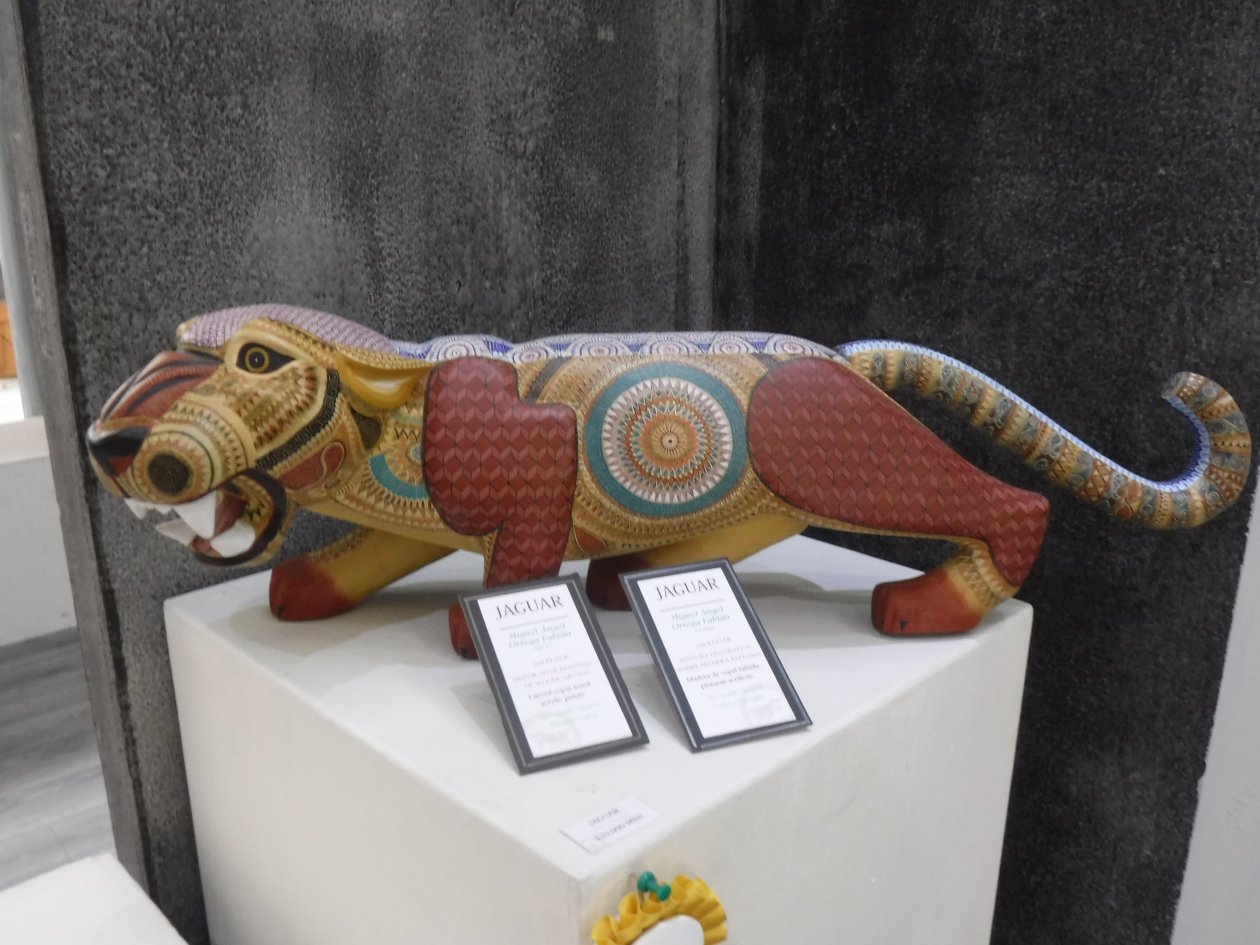 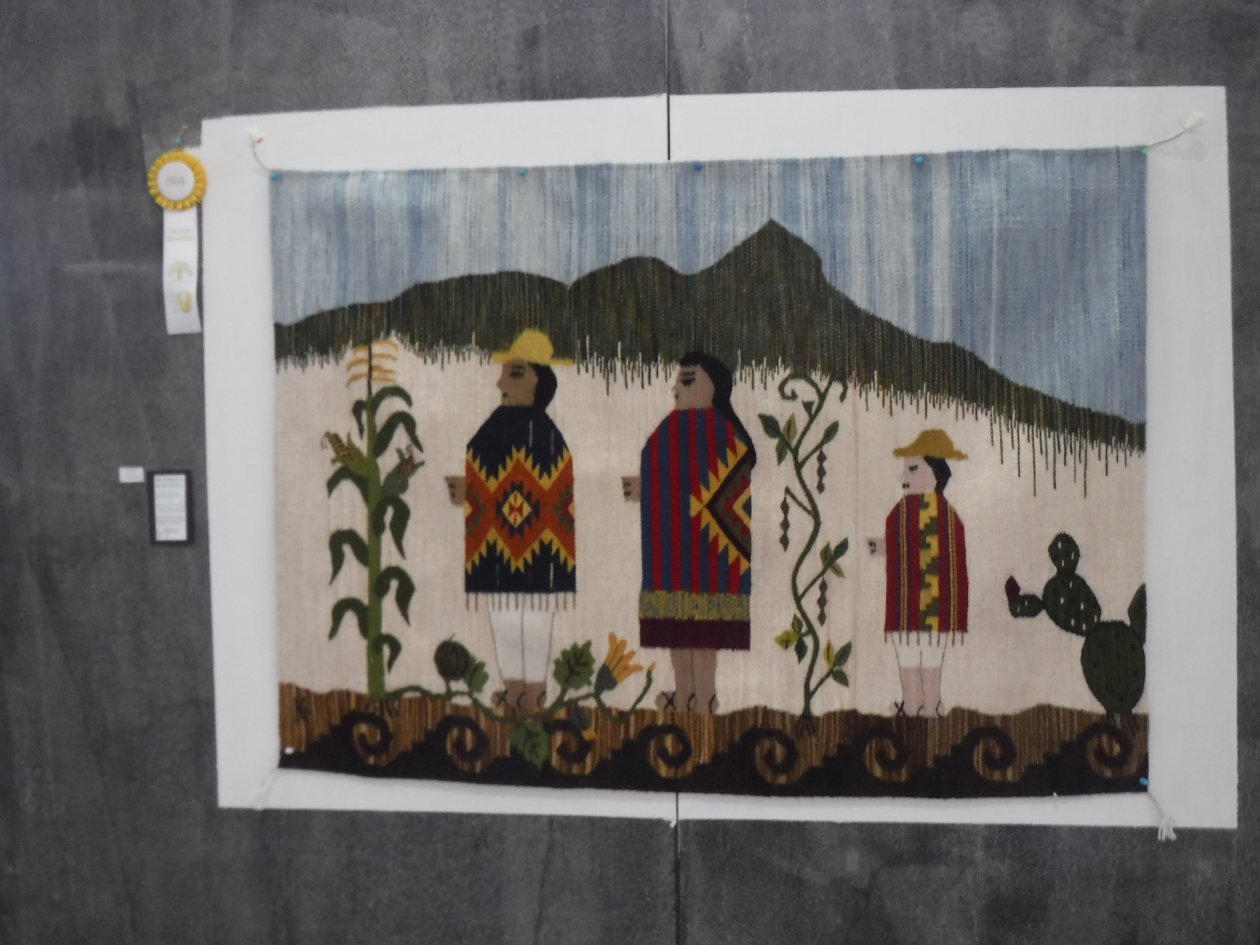 Today was a visit to the Centro de Arte Textil Zapoteco Bii Dauu, a family of weavers who use natural dyes including indigo and cochineal. Unfortunately, American entrepreneurs came to the town and convinced them to leave their roots and weave knock-offs of Navajo patterns. This family finally said no more, and went back to their original methods.

Here, we saw how cochineal is farmed and harvested to use in the dying process. It fascinates me that a bug changed the world with it’s vivid red. When you have time, read “A Perfect Red” and enjoy learning how this little bug brought more money into the Spanish treasury than all of the gold and silver together did.

I hope you’ve enjoyed bits and pieces of our ESP to Mexico. I’m hoping to have us travel to the Pacific side of Oaxaca and Chiapas on our third ESP to the fascinating country of Mexico and explore more of it’s rich history of textiles.
Vaya con Dios (Go with God). – Kathleen Weston 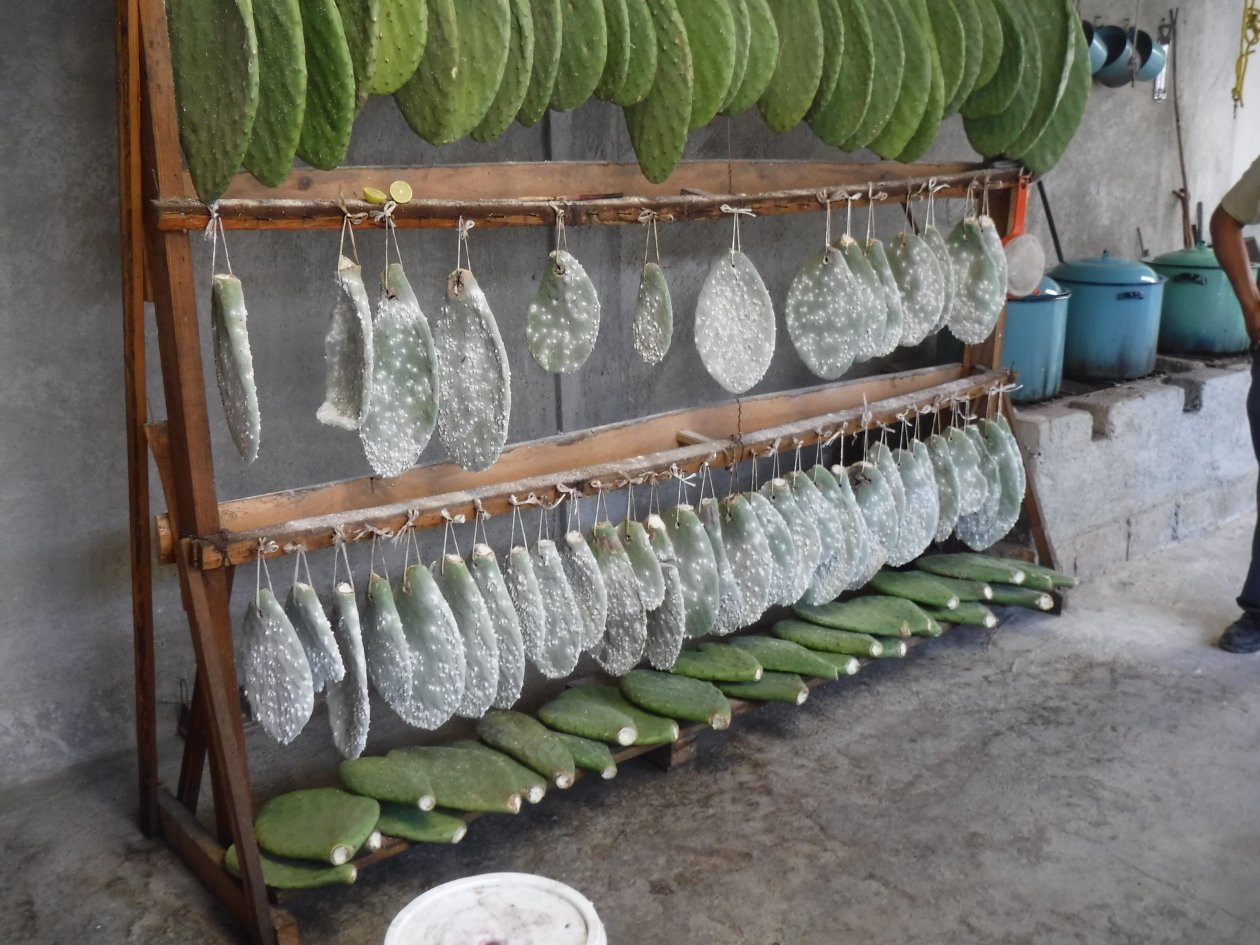 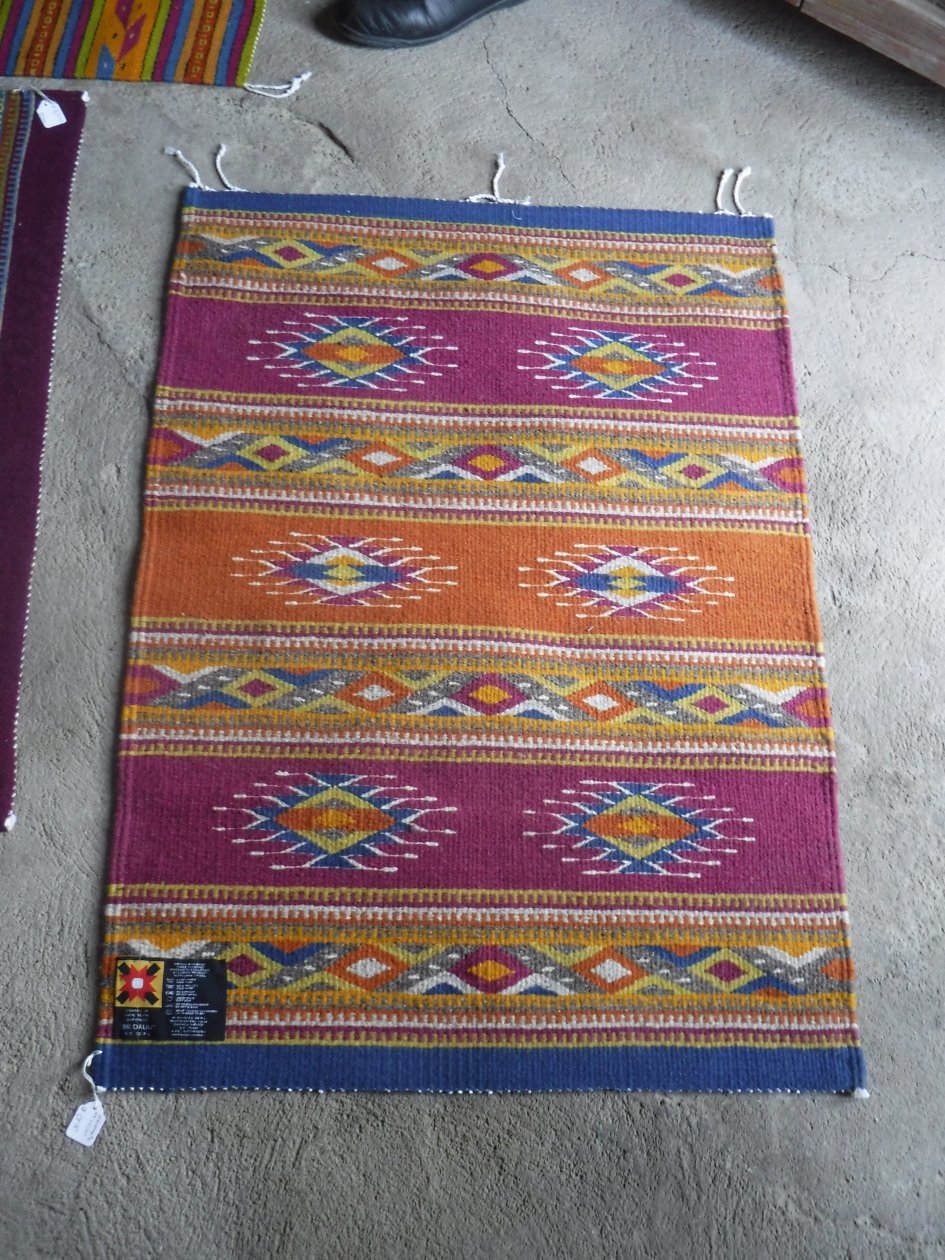 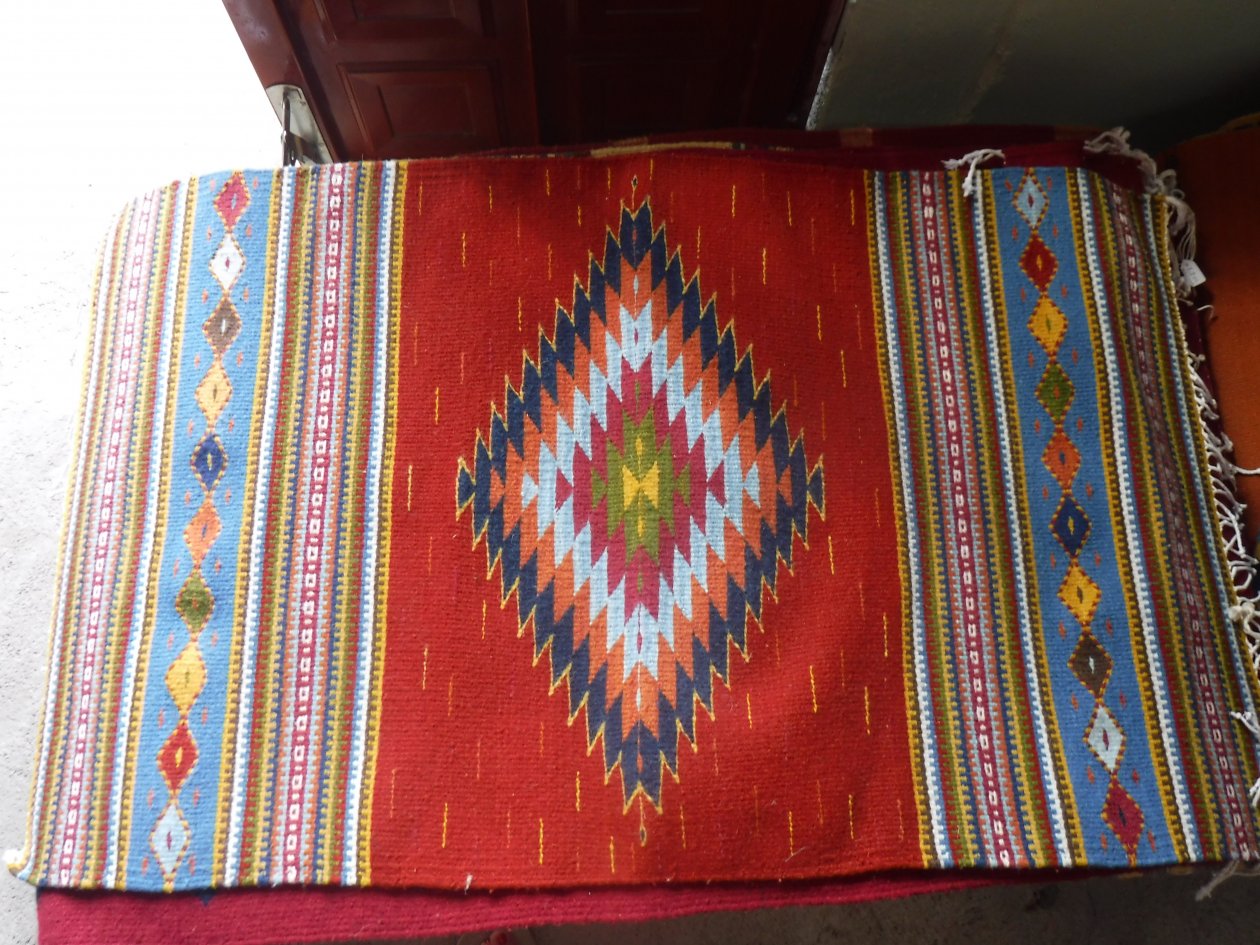