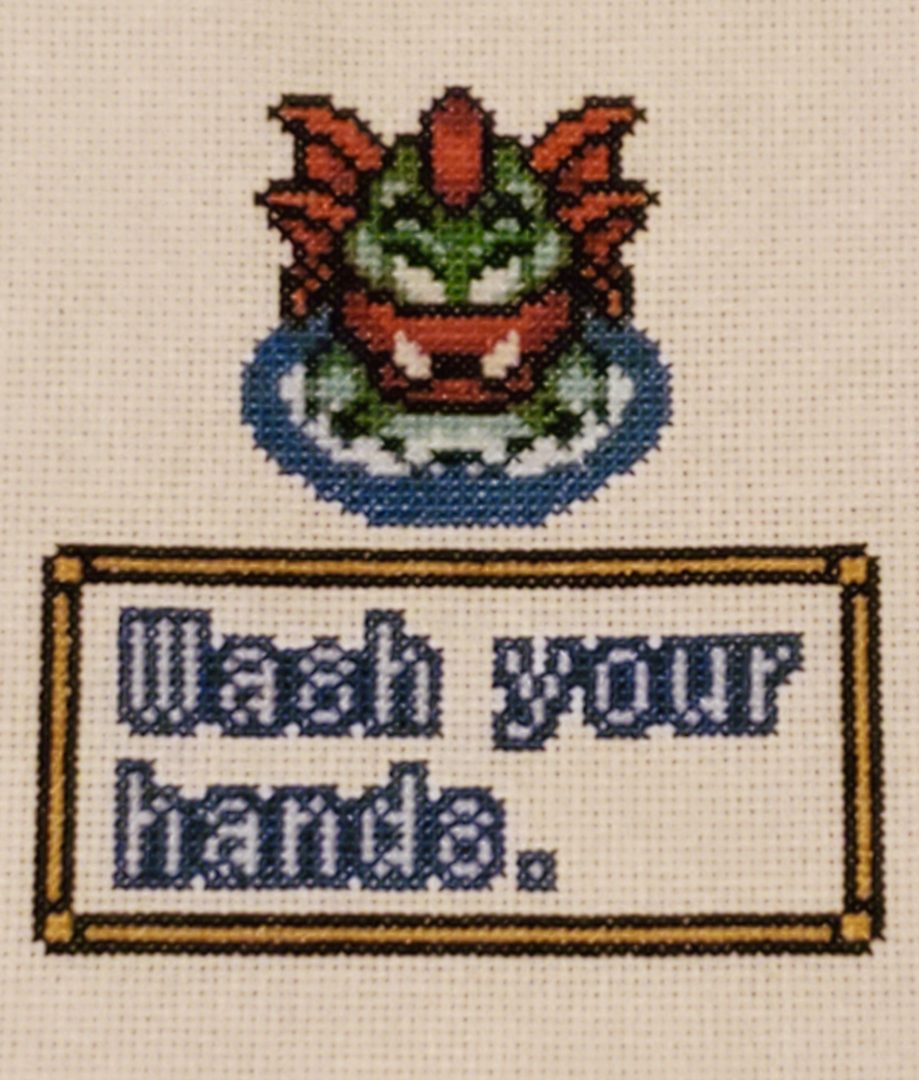 This year the Magnolia Chapter decided to have a little fun and created some donation pieces to be raffled off during a video game charity event. Two wonderful pieces were donated to Summer Games Done Quick 2020, which was held entirely online this year. Members chose their designs from a pool of options at the end of 2019, to be completed by June 2020 for submission.

Member Sharon Webster made a Legend of Zelda piece that is surprisingly appropriate to the times, and I inspired Pokémon trainers to be the best there ever was. Both of these pieces were accepted by the organizers of the event, and the prize listing credited the Magnolia Chapter EGA for submission. The organization was also announced during the prize block interviews, with the presenter stating that he thought the Embroidery Guild of America sounded “pretty cool.” See clips of the pieces being presented: Legend of Zelda | Pokémon

Games Done Quick is a gaming organization that runs a twitch channel dedicated to speedrunning. In 2010 they held their first charity event, which due to organizational challenges ended up being held in the organizers basement. Since then they have hosted semi-annual events at hotel venues, drawing huge crowds from around the world, as well as smaller virtual events when current events need emergency funds. Each event is a marathon of speedruns, which is where talented players complete games in record time. They do this through extreme skill and reaction speed, glitch and bug knowledge, and endless practice. For example, a game that may normally take forty or more hours may be completed in one to two hours. The main charity events last for seven days, while the emergency events usually last for a weekend. Since inception the winter event, known as Awesome Games Done Quick, donates all funds raised to the Prevent Cancer Foundation. The summer event, Summer Games Done Quick, donates all funds raised to Doctors Without Borders. Emergency events were organized for hurricane relief, tsunami relief, and corona relief, among others. These events regularly raise over a million dollars. Awesome Games Done Quick 2020 raised over $3.1 million, and Summer Games Done Quick 2020 managed to raise $2.3 million in the span of a week!

Donation funds are collected online, and the events offer a variety of incentives. One of the primary incentives are prize blocks, when donated prizes are raffled off for the stated price. The prize blocks contain prizes that are associated with the games being run.

For example, the Pokémon piece was raffled off during the Pokémon Shield run. The majority of these prizes are handmade by fans of the event, although some are donated by sites that sell gaming merchandise. Thread pieces are extremely popular prizes, and there are a lot of cross-stitch, string art, knitting and crochet pieces every year.

For those interested in learning more about pop culture and video game charts, Etsy is a great source of inspiration. Currently crochet and cross-stitch dominate the video game chart offerings, so there is niche available to any embroidery designers. My personal favorite shops are PixelPerfectPatterns, GamesByTheThread, and ChocoCocoStitch.

Watch upcoming events and find more information on their website, https://gamesdonequick.com. There next event is Fleet Fatales, a marathon hosted virtually and run entirely by female speedrunners. The organization also runs smaller shows on their twitch channel almost every night, to highlight certain communities within speedrunning.