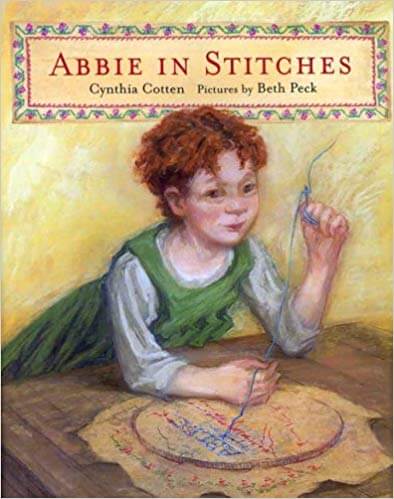 We have received a gift of 100 copies of the book, Abbie in Stitches, from author, Cynthia Cotten. Cynthia is the daughter of the late Mary Lou Storrs, National President of EGA from 1999 to 2001. A few years back, Mary Lou donated the Storr Miniature House, which is currently on display at our headquarters.

These are free, while supplies last, to chapters who are working with young stitchers. Please request copies from Cynthia Welch at cwelch@egausa.org, and let us know at what event you’ll be using them.

Here’s more about Abbie in Stitches:

Suitable for second and third graders, it is about a girl living in the early 1800s. “Abbie is firmly told, “Books are for boys, needlework is for girls,” but she hates her weekly needlework lessons. “I will not stitch when I’m grown. I’ll have books instead of needles and thread, and read as much as I like.” In the 1800s, however, fine needlework was what was expected from young women. Abbie’s frustration grows as she tries to finish her first sampler, but wise words from her teacher point her toward a solution. Beth Peck’s attractive, painterly illustrations have a layered look; their broad brush strokes contrast nicely with the delicate preciseness of Abbie’s embroidery.” – Julie Cummins,  American Library Association, Amazon Review